Remember way back in December 2015, when we revealed that Louis Tomlinson had gone under the needle for a tattoo on his butt, but we had no idea what the design was? Well, during a recent interview with 102.7 KIIS-FM, the singer admitted that the ink on his derriere features – are you ready for this?? – a penguin wearing headphones. That’s right, dear old Louis Tomlinson has a tattoo on his butt cheek of a small black and white penguin wearing headphones.

Louis Tomlinson’s tattoo was done at Great Lakes Tattoo in Chicago, by artist Erik Gillespie, and at the time, all kinds of rumors were circulating the internet, speculating about the design of Louis’ butt tattoo. Louis reportedly took to the trip to Chicago to see then-girlfriend Danielle Campbell (with whom he only recently broke up) and her family, before flying back to the UK for Christmas, and according to photos from the tattoo session, Danielle’s brother, Johnny, accompanied Louis to the tattoo shop, and may have even gotten a matching butt tattoo with the singer. 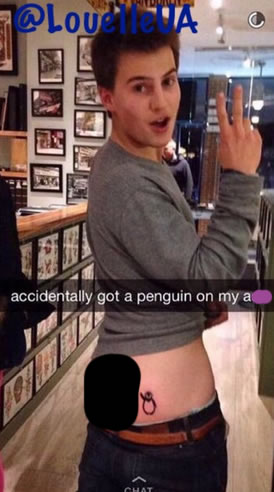 While Louis only hinted at his new butt tattoo with cheeky Instagram posts, captioning a photo of himself laying on his stomach and the artist working on the butt tattoo, “Sooooooo this happened” with a peach emoji, Danielle’s brother came right out and showed off the tattoo of the penguin on his butt, with the caption “accidentally got a penguin on my a**.” He also shared a Snapchat of Louis getting his own butt tattoo, using the caption “twinning,” which sparked rumors that the guys got matching penguin tats.

So basically, all signs pointed to yes, that Louis Tomlinson had, in fact, gotten a tattoo of a penguin on his butt. Still though, we weren’t positive. Then, during his interview with 102.7 KIIS-FM on January 19, the singer was actually asked about the butt tattoo and said, “It’s the most random thing of all time. It’s a penguin, but not just a penguin, a penguin with headphones, which makes it even more weird.” Louis was quick to add, “I don’t know why, but now I forever have a penguin on my ass, yeah.” 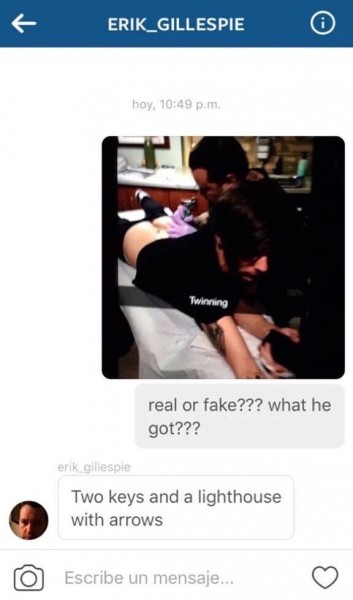 During the same tattoo session that resulted in his penguin butt tattoo, Louis also got the number “28” tattooed on his fingers, which represents the jersey number he wore for the Doncaster Rovers, the football club he joined during the 2013-2014 season. Whether it’s a coincidence or not, Ed Sheeran also rocks a tattoo of a penguin on his arm, which he got as a bro tat with Louis’ One Direction bandmate Harry Styles, inspired by the British claymation series Pingu. Instead of a penguin, Harry opted for a tattoo that actually says “Pingu.”