The infamous Carl McCoid of the 29+ crazy Miley Cyrus fan tattoos is reportedly removing several sleeve images of the inked-up pop star, after Miley said his obvious obsession made her feel “creeped.” That’s right, it wasn’t the divorce from his wife, who found his fixation on Miley Cyrus “a bit weird” to put it gently, or the pleading of his three children to stop getting tattoos of a girl 20 years his senior, that finally prompted MileyCyrusCarl to remove his tribute tattoos…it was the dissatisfaction of Miley Cyrus herself!

Despite having never met Miley Cyrus, Carl McCoid, who goes by the name MileyCyrusCarl on social media, has been systematically covering his body in tribute tattoos to the singer, and now, despite previous plans to create a “timeline” of Miley’s ever-changing appearance in permanent ink, the 42-year-old from Bridlington, East Yorkshire, is apparently getting over his obsession. According to MileyCyrusCarl himself, he is undergoing laser treatment to remove some of his Miley Cyrus tattoos, after Miley was quoted saying, “There’s a dude that holds a record of the most pictures of my face; he has like 18 pictures of my face and they’re really ugly.”

You might have expected Miley’s “ugly” comments about Carl’s tribute tattoos to hurt his feelings, but it turns out, he actually agrees with the 22-year-old singer! “I just wanted her to know that somebody would [get tattoos of her] and how special she actually was as a person and as an idol,” Carl said, before admitting that he isn’t a big fan of some of his ink either. “To be honest, I’ve never admitted to anybody that I actually don’t like these arm tattoos, I couldn’t even admit it to myself. It frustrates me that they’re not the true look of Miley.” Right, cause that’s the problem. 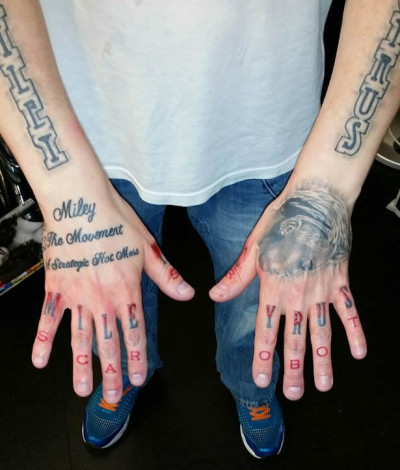 Over the years, Carl McCoid has had a whopping 29 or more tattoos of Miley Cyrus’ portrait, album titles and song lyrics inked on his arms, back, neck and hands, and now he plans to undergo laser treatment to have some of them removed. Sounds expensive right? As Carl says though, “I don’t think about the money it will cost to remove them. Tattoos have a psychological effect and to remove that is more important than the money.” So what does Carl McCoid plan to do next? “I realize it’s time to stop and change direction in my life, rather than it being all Miley, Miley, Miley.” We can’t wait to find out!