One Direction is preparing for a much-deserved hiatus in 2016, and of all the things he could be planning for the break, the only inkless member of the British boyband, Niall Horan, says that he’s going to use that free time to get his very first tattoo (and also to travel across the globe staying in youth hostels with some friends from Ireland, apparently)! The 22-year-old pop star admitted recently that he’s been feeling a bit left out being the only One Direction star without a tribute tattoo to his fellow bandmates, and plans to remedy that by going under the needle for a tattoo at some point in the near future. Are you all ready for this?!

In a recent interview with Fabulous magazine, Niall said, “I’m definitely doing something about [not having a tattoo] because when we’re apart, I know I’m going to miss them. All of the lads have got this weird tattoo of a Phillips screwdriver on their ankle. I’d like to say it means something deep but it’s just a tattoo everyone likes.” Although Niall says the one tattoo Harry Styles, Liam Payne and Louis Tomlinson all share doesn’t have a deep meaning, we have heard through the grapevine that the screws (or plus signs, or X’s, depending on how you look at it) Harry and the other boys have inked on their ankles is something that keeps them grounded.

Niall Horan first hinted that he may be interested in getting a tattoo back in October 2012, when Louis tweeted, “So Me and Liam joined the crew yesterday and got two screw tattoo’s on our ankles, now we all have it except Niall!” To which Niall responded, “Ok I’ll give into you! I’ll get it done! Jesus! Have ya quite finished? #neglect hahahaha.” It may have taken him three years to work up the nerve, but now it looks like we may actually see a Niall Horan tattoo at some point soon! During the Fabulous interview, Niall said, “I’m going to brand myself with that one [screw tattoo] and it will remind me of the lads so they’ll be with me wherever I go.” 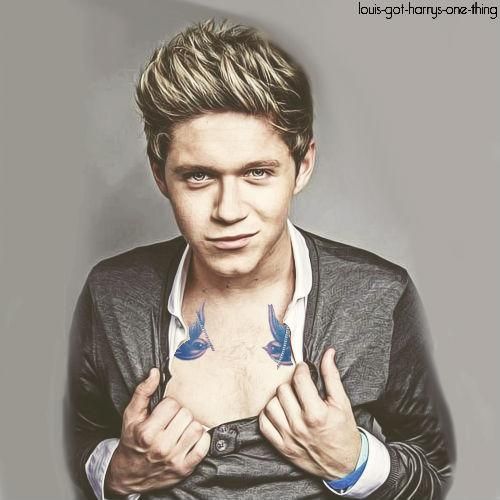 If he really is planning to get his first-ever tattoo, it’s not a bad idea for Niall to take the easy route and get the tiny screw tattoo on his ankle that the rest of his bandmates share. It a tiny little tattoo that won’t hurt too badly, and that he can easily cover up if he wants to. And with the unexpected departure of beloved bandmate Zayn Malik earlier this year, Niall getting a matching One Direction screw tattoo would be a great way for the boys to reemphasize their dedication to one another and to the band that got them their big break in the music business. So what do you all think of Niall Horan’s tattoo plans??