They share a matching tattoo, but does that mean that Rihanna and Chris Brown are meant to be together? (Keep in mind that Breezy and Karrueche Tran also got matching tats recently). Between Chris Brown’s “impossible triangle” tattoo, his recent Instagram pics of a sexy Tran, and Rihanna’s cryptic Chris-inspired tweets, there’s no denying that this on-again, off-again RiRi-Breezy saga is a relationship rollercoaster. The only question is – who will end up together in the end? Check back with us soon to stay up-to-date on Rihanna’s tattoos and her alleged love affair with ex-flame, Chris Brown.

You didn’t think RiRi and Chris Brown would just get back together and let all this free publicity settle down, did you? In yet another twist in the ongoing Rihanna and Chris Brown saga, Breezy has put rumors of a reunion temporarily on hold by posting sexy pics on Instagram of girlfriend Karrueche Tran, a Vietnamese model the R&B singer has been dating for about two years. Apparently Breezy thought Tran would make a good model for his Mechanical Dummy line of clothing, as the Instagram pictures show her sporting a few of his items. Based on these Karrueche Tran pics, we’re going to take a stab in the dark and say CB and his girl are still in the “on-again” phase…which may come as quite a surprise to Rihanna.

Rihanna: “He’s the only one I wanna love!”

Rihanna has stirred up her fair share of speculation about a reunion with Chris Brown, mostly through messages posted on Twitter. Earlier this week, Rihanna wrote, “He’s the only one afraid to love me…Yet he’s the only one I wanna love!” She then quoted lyrics from Breezy’s track “Yeah 3x,” posting, “Put your troubles aside and start living.” Despite rumors that RiRi and Breezy enjoyed a secret rendezvous on the pop star’s yacht in the French Riviera, it appears as though the former love birds just aren’t on the same page. Or else they’re involved in some kind of crazy love triangle, which was first hinted at when Chris Brown’s “impossible triangle” snake tattoo first appeared on his back. 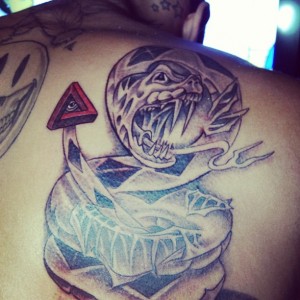 Chris Brown’s snake tattoo – which apparently has to do with the Chinese zodiac – isn’t the only Rihanna-related tat the singer has though. Back when RiRi and Breezy were still a pair, the two artists hit the tattoo parlor and got matching stars tattoos on the backs of their necks. Breezy’s tattoo features three simple star outlines of varying sizes, and is inked behind his right ear. Rihanna’s neck tattoo started out as a smattering of tiny stars on the back of her neck, but flourished into a full-on neck and back tattoo when the superstars ended their relationship in 2009. Although Rihanna probably changed her stars tattoo in order to distance herself from Chris Brown after their break-up, it certainly seems like RiRi wants to be back in Breezy’s arms!

If it weren’t for Rihanna’s Twitter updates, we would probably know a lot less about the Rihanna and Chris Brown relationship rollercoaster. Even though they are usually pretty cryptic, you can read a CB connection into nearly every quote or lyric posted by RiRi. Last month, amid speculation that the former couple had reunited, Brown tweeted that he was accompanying Ludacris to St. Tropez, where Rihanna was already enjoying a tropical vacation. Shortly after Brown’s message, Rihanna posted, “Touch down baby, help me pick out my fit.” While aboard a yacht for a private party in July, Rihanna and Chris Brown were also reportedly kissing in “plain sight of other partygoers.” So there you have it, yet another twist for the star-crossed lovers!