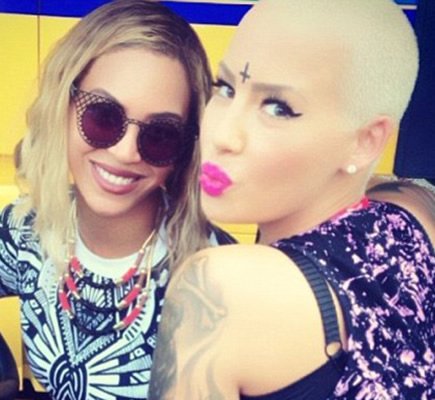 Amber Rose is facing Illuminati rumors “head on” with her latest tattoo – a small black inverted cross inked right in the middle of her forehead. The model and new wife to rapper Wiz Khalifa is no stranger to attention-grabbing tattoos (she got a hilarious portrait tat of her husband inked on her arm in April), but even we are wondering what the heck she was thinking when she opted for this crazy forehead tattoo! Regardless of her reasoning for getting the new ink though, Amber Rose is dead-set on dismissing rumors that the cross tattoo is a symbol of Satanism. In the meantime, we are SERIOUSLY hoping that her forehead tat is temporary.

During the “Made in America” festival in Philadelphia over Labor Day weekend, Amber Rose posted a picture of herself and Beyonce on Instagram, along with the message: “My sweetheart @beyonce and I chopped it up about Bash & Blue Ivy they’re gonna get married 1 day…Bash likes older women.” The potential wedding between Amber Rose’s son Sebastian and the adorable daughter to Beyonce and Jay Z was not what had jaws dropping though; it was the new cross tattoo Wiz Khalifa’s wife now sports between her eyes. Inked in simple black ink, Amber Rose’s tat features an upside-down cross that has many people accusing the model of being a Satan worshiper and member of the Illuminati.

Amber Rose took to Twitter to defend her newest ink, saying: “An upside down cross is a St. Peter’s cross…it is not satanic. Look it up before u speak ignorance. Good Day.” Okay Amber, technically you are correct – the sign of the inverted cross comes from the Catholic belief that St. Peter was crucified upside-down, which he apparently requested because he felt he was unworthy to be crucified in the same way as Jesus. As a result, some Catholics use the inverted (or Petrine) cross as a symbol of humility. However, an inverted cross has also been widely used as an anti-Christian symbol, similar to pop star Rihanna’s tattoo of a red slanted cross on her collarbone. In most cases, an inversion of a religious symbol is used to represent the antithesis, or opposite, of that icon, hence the Illuminati/Satan rumors. It will be interesting to see how Amber Rose gets herself out of this mess!