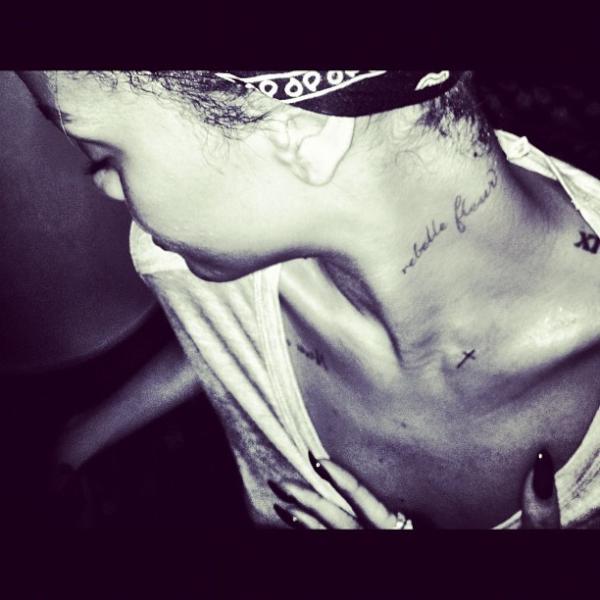 Rihanna’s gone and done it again! The Barbadian bombshell got another tattoo inked on her collarbone on March 15, 2012, and it turns out it’s a simple, small cross tattoo. That may seem all fine and good, but you should know that nothing is simple when it comes to Rihanna. Turns out the singer’s cross tattoo has sparked some serious controversy from critics who think the mark is actually a symbol of her godlessness. What do you think about RiRi’s controversial cross tat and its meaning? Read on to find out all about it!

Barbadian superstar Rihanna is famous for many things: her wild hairdos, her sometimes outrageous costumes, and even more so her rapidly growing collection of tattoos. Less than two months after getting a “thug life” tattoo inked across her knuckles as a tribute to the late Tupac, Rihanna got another tattoo, this time inspired by her religious beliefs…or is it? One of the pop star’s latest tattoos features a tiny cross inked on her left collarbone, right near her Roman numeral tattoo and her “rebelle fleur” tat. Rihanna posted black and white pictures of her cross tattoo online, which may have been deliberate because sources say the tat is actually inked in red, although it looks black in the photos. RiRi’s controversial cross tattoo appears to have been inked in the same “dried blood” style that Kid Cudi used for the Pink Floyd hand tattoo he got the month before Rihanna got her cross.

When she decided to get a cross tattoo Rihanna turned to renowned tattoo artist Bang Bang, who also inked several of her other tattoos. The Rihanna’s cross tattoo was inked at Bang Bang’s tattoo shop on New York’s Lower East Side. “We did a very fine small cross directly on her collarbone. She said her cross meant a lot to her and she totally loved it!” Bang Bang was quoted saying about Rihanna’s tattoo. Although a cross tattoo may not seem like Rihanna’s style, the cross isn’t the only nod to religion that the songstress has had inked on her body. In 2008, Rihanna got an Arabic tattoo on her left ribcage that translates to “Freedom in God.” RiRi also has a Sanskrit prayer inked on her right hip, which was inked in 2007 and was meant to read “forgiveness, honesty, suppression and control” from the Sanatana Dharma (a holy Hindu scripture) Bhagavad Gita 10.4-5.

Rihanna’s cross tattoo has sparked some fierce public outrage by critics who claim the slanted cross tattoo the singer is now sporting symbolizes godlessness and ties to the Illuminati. Apparently, RiRi is being accused of adopting the slanted cross tattoo from the ancient Freemasons, who are often linked to the Illuminati, an elitist group believed to possess more social control than the world’s most powerful political leaders. The Freemasons once used the slanted cross symbol, similar to Rihanna’s cross tattoo, depicted with a crown around it as a representation of their belief system. While Christians and other religious groups use vertical crosses as a symbol of their faith, RiRi’s cross tat is deliberately slanted, which has led to criticism about the her faith.

Other celebrities have speculated about Rihanna’s apparent lack of faith. R&B singer Omarion was quoted saying in 2009, “I don’t personally know Rihanna’s beliefs but I think there’s a very dark and very sinister part of the entertainment business and I think it’s very visible. I don’t know if Rihanna [has fallen victim to those pressures].” He continued, “I’ve never really heard her speak about it. I hope that she doesn’t believe in that stuff and I don’t think that she does, but I don’t know.” If RiRi does believe in God and is simply baiting the public, it sure doesn’t help when she randomly tweets things like “F— YOU SATAN. F— right off!!!” which occurred in February 2012. 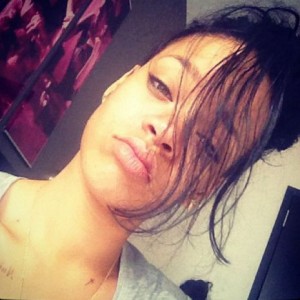 Other Celebrities With Cross Tats

Regardless of the meaning behind Rihanna’s tattoo, her cross tattoo joins the ranks of several other celebrity cross tats out there. One of Miley Cyrus’ many finger tattoos, for example, is a tiny cross inked on the inside of her right ring finger. Miley Cyrus’ cross tattoo symbolizes her Christian faith and was inked on the singer/actress in December 2010. Fellow former-Disney star Demi Lovato also has a cross tattoo inked on her body, which she added to her growing collection of ink in June 2011. Demi Lovato’s cross tattoo joins several other tattoos the teen star has that were inspired by religion, including her “you make me beautiful” tattoo and her “faith” arm tat. It’s interesting that Rihanna’s cross tattoo matches a tat that Demi Lovato has, since the star has revealed that RiRi is one of her biggest role models. “I haven’t meant Rihanna, but we’ve talked over the phone and I want to meet her so badly,” Demi has said. “I love her attitude; she’s sexy and confident. She’s gone through quite a lot and has come out strong. I would like to be the caliber of Rihanna and hopefully one day I’ll get there.” Matching cross tattoos are a good way to start!