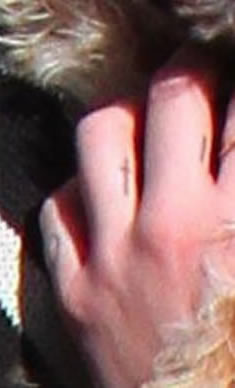 Miley’s fourth tattoo was inked in December 2010, while she was in New Orleans filming her new movie “So Undercover.” The tat is inked on her finger and features a tiny black cross, which seems like it would probably be a shout out to God, since she was raised a Christian by her parents. Some would say, though, that Miley’s recent scandalous actions have been decidedly “un-Christian.” Is Miley Cyrus’ cross tattoo a symbol of her Christian faith or an attempt to reverse all the negative criticism she has gotten in recent years?

It seems like Miley Cyrus’ main goal in the past few years has been to distance herself from her “Hannah Montana” Disney character and establish herself as an adult. In fact, one of her first moves toward this end goal was to legally change her name from Destiny Hope Cyrus to Miley Ray Cyrus in 2008. Shortly thereafter, Miley started in on the tattoos. Just a few months after getting the heart tattoo on her finger in 2010, Miley Cyrus got a tattoo inked on the ring finger of her right hand, featuring a tiny black cross. Pictures of Miley’s tattoo showed the superstar wearing a bandage on her hand near her middle finger. Later, reports confirmed that Miley had gotten a tattoo, and it was a small cross inked in simple black. Miley Cyrus’ cross tattoo was inked at Eye Candy Tattoo in New Orleans, where she was filming her new movie “So Undercover.” The cross tat on Miley’s finger was inked in December 2010, and rumor has it, her best friend got the same tattoo.

The obvious meaning of Miley Cyrus’ cross tattoo would be that she was raised to practice the Christian faith, and wanted to permanently display her beliefs with a cross tattoo. Another interpretation of the cross tat could be that she is trying to save some shred of her good-girl image, despite some controversial actions of hers that have suggested otherwise. For example, Miley posed topless in Vanity Fair at age 15, pole-danced during her performance of “Party in the USA” at the Teen Choice Awards in 2009, was recently caught on video laughing about being a “pothead,” and has also been photographed smoking cigarettes. And that’s just to name a few.

Some of the most recent criticism geared towards Miley Cyrus involved the penis birthday cake she got her boyfriend for his 22nd birthday, which she was photographed trying to be sexy and provocative with, but just didn’t quite pull it off. And let’s not forget her numerous tattoos. It seems with each new batch of controversy, Miley Cyrus is trying to distance herself from her Disney “Hannah Montana” image. However, by getting a cross tat on her finger, Miley could be trying to prove that she’s not always the “bad girl” that she has so eagerly portrayed herself to be in recent years. 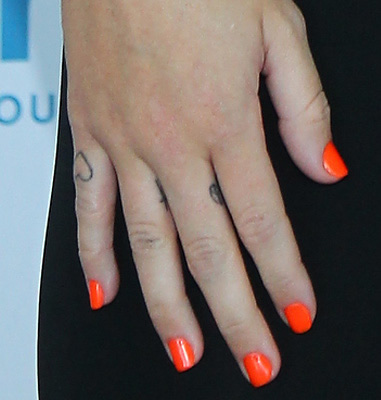 It seems Miley has devoted the space on her fingers to all the things she holds most dear to her heart. The small heart tat on her pinky finger matches heart tats that her dad and mom both have, representing the love she has for her family, and her other finger tattoos celebrate peace, equality, and now her Christian faith. Miley Cyrus’ finger tattoo is simple and small, but obviously has an extremely important meaning for the teen star. Miley’s faith in God seems to be pretty unwavering; she has attributed a number of good things in her life to God, including her relationship with Australian actor Liam Hemsworth. Miley met her future husband on the set of her film “The Last Song,” and reportedly said: “The last thing I was expecting to do was fall in love. I went there thinking the summer was all about me and getting focused on my career. But I guess God was like, ‘Girl, here is this amazing guy.’” Miley’s ease with talking about God is obvious even in her tweets. She has passed on to followers Christian messages like “Where in the bible does it say to judge others? Oh right. It doesn’t. GOD is the only judge honey. GOD is love.”

Miley isn’t the only one who loves Miley Cyrus’ tattoos! Celebrities like Vanessa Hudgens have expressed their appreciation for the pop star’s body art, claiming that they’d like to get similar tats. As Vanessa Hudgens told George Lopez, “Well I definitely want one here on my ribcage. I have to figure out what it’s gonna say.” Miley Cyrus has a tattoo on her ribcage! She continues, “I want to get a little cross here [on my pinky finger]. I was raised Catholic. Miley [Cyrus] has one there as well and it just looks so cool, like ‘I’m a good girl ’cause I have a cross.’” So there you have it. Plus, in June 2011, Demi Lovato got a cross tattoo inked on the outside of her right hand as a nod to her Christian faith. Could Demi’s cross tattoo also have been inspired by Miley’s finger tattoo?