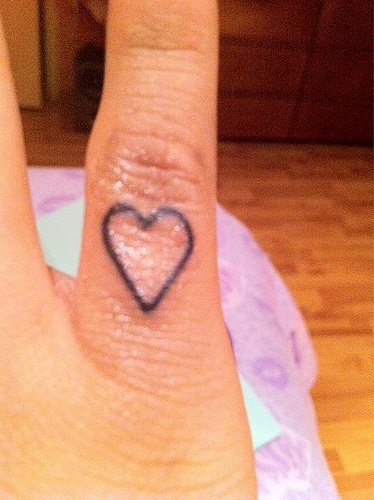 By Meghan Mabey | On January 28, 2012
**Update: On October 14, 2014, during the Australian leg of Miley’s Bangerz world tour, the singer hit up a tattoo shop to refresh her heart pinky tattoo. Miley added some pink and blue to the heart tattoo, as well as some sparkling white stars, which kind of makes the ink look like the galaxy!

The first of the many tattoos Miley Cyrus has gotten on her fingers was a small heart outline, which she had inked on the outside of her right pinky in September 2010. It’s unknown whether Miley’s pinky tat was inked in the States or not, but she was still only 17 when she got the new heart ink  – too young to get a tattoo legally without parental permission. Although it’s a less literal symbol of love than her ear tattoo, Miley’s finger tat represents something truly important to her. In fact, the pop star isn’t the only one in her family who has a tiny heart tattoo. Find out who else shares Miley Cyrus’ heart tattoo!

2010 was a big year for Miley Cyrus! Besides the love tattoo the star got inked on her ear, Miley Cyrus also got a tattoo of a tiny heart outline inked on the outside of her right pinky. Pictures of the pop star’s heart tattoo showed the 17-year-old star at Los Angeles International Airport, returning from Paris, where she was shooting her new film “LOL: Laughing out Loud,” and the small heart tattoo was visible on her pinky finger. Although Miley’s heart tattoo could have been inked in the States, it is possible that she got the tat in France, where there is no age limit for getting tattooed. The former Disney star’s pinky tattoo was inked in September 2010, and was the third of her many body tattoos. And if Miley’s mom, dad and half-brother are any indication of how many tattoos the pop star plans to get, there may be no end in sight for her!

Pictures of Miley Cyrus’ tats show that the superstar’s heart tattoo isn’t the only way that Miley has expressed her beliefs about love and equality. Miley Cyrus also has “love” tattooed on her ear, a peace sign tattoo inked on her finger, and an equal sign tattoo also inked on her finger, as a tribute to LGBT rights. We all know that Miley believes that “all love is equal,” which is what she tweeted when she got her equal sign finger tattoo, and that she is in love with boyfriend Liam Hemsworth, so it’s not hard to imagine what Miley Cyrus’ finger tattoo is supposed to represent. Miley Cyrus is also a Christian, has a very strong connection with her family members, and has been very vocal about equal rights in recent years, which helps shed a little light on the meaning of her heart tat.

Miley met future husband Liam in 2009 on the set of her movie “The Last Song,” and the two are still happily together. Shortly after they started dating, Miley got her “love” ear tattoo, and just a few months later, her heart pinky tattoo. “The last thing I was expecting to do was fall in love,” said Miley in reference to her Australian hottie. “Liam has become my best friend in the whole wide world. I love him.” Although Miley hasn’t said much in public about her finger tattoos, including the heart tattoo on her pinky, we’re guessing it was inked by Hollywood tattoo artist Christopher Garcia. Garcia inked Miley’s first two tattoos (after her mom signed the consent forms of course), and has also tattooed some body art on Miley’s half-brother and both of her parents. That’s how you know the Cyrus family is close – they all share the same tattoo artist. 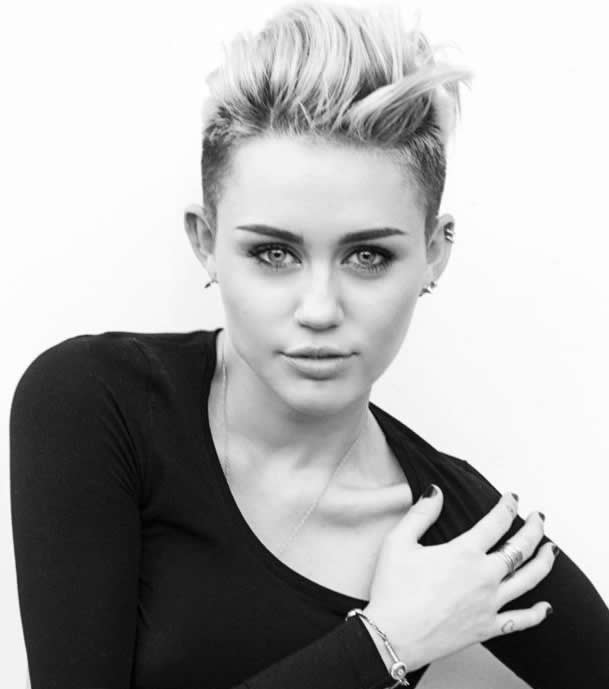 Miley Cyrus’ heart tattoo matches the tat her mom, Tish, got inked in the same spot on her left pinky, and a heart tat that Miley’s dad, Billy Ray Cyrus, also has. Back when Miley was only 15, her father said in an interview about his heart finger tattoo: “We were sitting in church […] and I noticed that she picked up my hand and drew this little heart on there, and I had already declared that day was Miley’s day. I said, ‘Anything you want to do, today is your day.’” Miley’s response? “Daddy, I know what I want to do…take you to the tattoo parlor.” And so the Cyrus family all has matching heart tattoos on their fingers. As far as Miley’s tatted up half-brother Trace goes, some people say he also has a matching heart tattoo, but good luck trying to find it! Whether Miley Cyrus’ tattoo represents family, loyalty, or her beau Liam, at least it means something important to her. As Miley has said in the past, “I could never get a meaningless tattoo.” So, there you go!