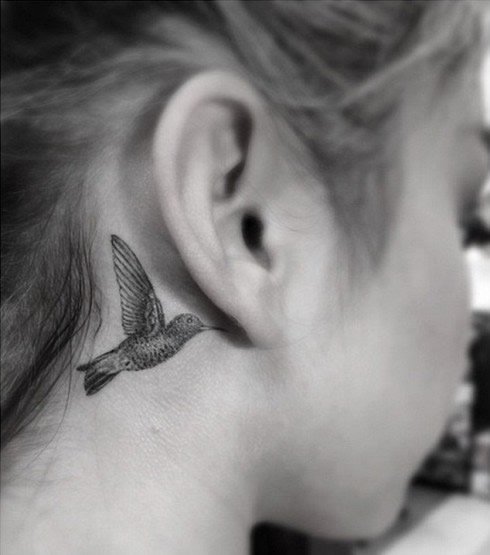 “Modern Family” star Sara Hyland debuted a cute new hummingbird tattoo this week to prove how “independent and resilient” she is, and we feel like we have to point out that the actress’ behind-the-ear ink looks an awful lot like the hummingbird tattoo Robin Williams’ daughter Zelda had done just last month, in honor of her late father. Sara Hyland took to Instagram on November 19 to reveal her cute new tattoo, and the black and white ink features a small hummingbird in flight, inked just behind her right ear.

It was just two months ago that Sarah Hyland admitted she had been in an abusive relationship with ex-boyfriend Matt Prokop, which resulted in the 23-year-old getting a restraining order against the man she says choked her with “a grip so tight that [she] could not breathe or speak,” and bombarded her with “vile, threatening and emotionally disturbing texts and voice mails including his own suicide threats.” During a recent interview with talk show host Meredith Vieira, Sara talked about her abusive ex-boyfriend and revealed how she overcame her “adversity,” saying that “People have to go through things in order to become the person they are today, and that’s that.”

The physical and emotional abuse Sarah Hyland endured at the hands of her ex-boyfriend has obviously had a significant impact on the young actress, and when she revealed her new behind-the-ear hummingbird tattoo on Instagram, she accompanied the photo with this caption:

The hummingbird, though it be but little, can travel great distances. It is a carrier of joy and lightness of being. Independent and resilient; the hummingbird lifts negative energy from your life and shows you the perfect combination of playfulness and endurance. Thank you @dr_woo_ssc for giving me this little guy to always remind me that (and whisper sweet nothings in my ear).

Not only is Sarah Hyland’s tattoo nearly identical to Zelda Williams’ hummingbird tat, but both pieces were actually done by the same tattoo artist – the famous Dr. Woo of the Shamrock Social Club tattoo shop in West Hollywood. No word on whether Sarah saw Zelda’s hummingbird tattoo and decided she wanted a little birdy friend of her own, or if she came up with the design on her own, but we think both girls’ tattoos are super cute and meaningful!