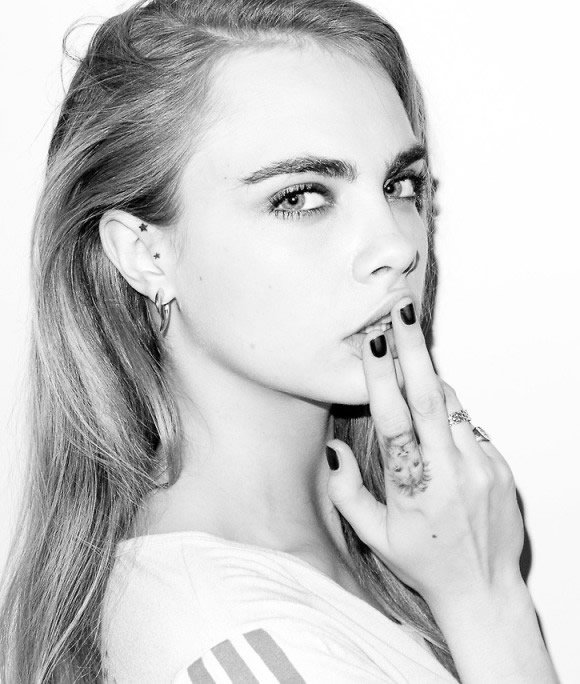 During an October 2013 trip to Rio de Janeiro, British fashion model Cara Delevingne went under the needle yet again and added TWO new tattoos to her rapidly growing collection: the Roman numeral 12 inked on her right ribcage and a unique tattoo of the Southern Cross constellation around her ear. Cara had both tattoos inked at the King Seven tattoo shop in Rio de Janeiro, where she also reportedly found a willing pal to practice her tattooing skills on. Although Cara’s Roman numeral tattoo was easily spotted during a DKNY fashion shoot in New York on October 14, 2013, thanks to the revealing orange dress she was wearing, it wasn’t until we noticed a close-up image of Cara’s profile that we glimpsed the cool stars tattoo encircling the model’s ear.

Cara Delevingne’s tattoo of the Southern Cross was inked by Brazilian tattoo artist Daniel Tucci, and features five small black dots that represent the stars in the constellation, inked in a cross design around her right ear. According to Tucci, the Southern Cross replicated in Cara’s ear tattoo is one of the symbols of Brazil. “It’s a cross made with stars around her ear, one star on the top of the ear, one behind, one on the back, one below and one on the tragus, like a circle around her ear,” said Tucci about Cara’s Southern Cross tattoo. “I have a photo of it but she asked me not to post it on Instagram before she posts it, she wants to make a surprise of it. She loves tattoos and says she isn’t going to stop, she wants to be covered in tattoos.”

The fact that Cara Delevingne appears to have a tattoo addiction comparable to the famously inked-up Rihanna (whom she calls her “lover”) is apparently not good news for the 21-year-old’s modeling agency nor is it looked upon with admiration by the fashion powerhouses that employ her.

According to one source, “Major brands [like Chanel and Burberry] have already expressed alarm at the quick succession of Cara’s tattoos and Sarah [Cara’s agent] has told her to call a halt to it.” The source continued: “She’s also been told it’s not a good idea for Hollywood, where she has set her sights. But Cara doesn’t like having her wings clipped and she reckons she can take it all in her stride.” We say more power to her; bring on the tats!