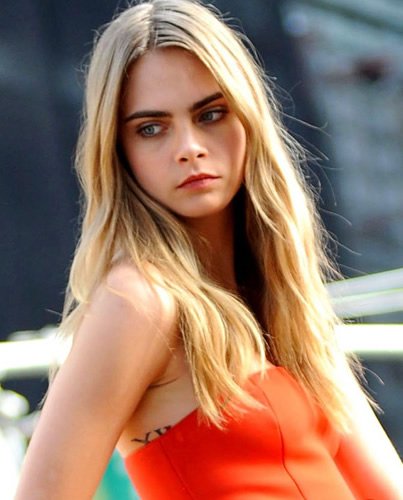 Having already made waves with the lion tattoo on her finger, her “CJD” hand tattoo, the “Made in England” tat inked on the bottom of her foot, and her mother’s name “Pandora” on her arm, Cara Delevingne pushed the envelope yet again when she debuted another new tattoo on her ribcage in October 2013. Ignoring advice from her modeling agency, Cara went under the needle yet again, this time opting for a bold tattoo inked just below her right armpit. Cara Delevingne’s tattoo was inked by Brazilian tattoo artist Daniel Tucci during the 21-year-old model’s October trip to Rio de Janeiro, and features the number 12 inked in black Roman numerals.

“I drew a Number 12 in black Roman numerals about five centimeters big on her,” said Tucci about Cara’s ribcage tattoo. “She told me that 12 is her lucky number and that’s her lucky place, below her breast.” Although Cara’s Roman numeral tat isn’t exactly below her breast, it is close by, and that must be good enough for the model. Cara also opted for another tattoo during the same session in Rio de Janeiro – the Southern Cross constellation made up of five stars, which is one of the symbols of Brazil, according to Tucci. The tattoo artist added: “I have a photo of it but she asked me not to post it on Instagram before she posts it, she wants to make a surprise of it. She loves tattoos and says she isn’t going to stop, she wants to be covered in tattoos.”

Cara Delevingne’s Roman numeral tattoo was first debuted during a DKNY photo shoot in New York on October 14, 2013, when she sported a bright orange skater dress that showed just the top part of the ink. The fact that the Roman numeral tattoo could be seen during the photo shoot is a concern many people have about Cara’s future in the fashion industry, and Cara’s agent Sarah Doukas has reportedly already received complaints from powerful fashion houses like Chanel and Burberry. According to a source, “Major brands have already expressed alarm at the quick succession of Cara’s tattoos, and Sarah has told her to call a halt to it.” Little do they know, Cara is already obsessed with tattoos, and she doesn’t plan on stopping anytime soon!