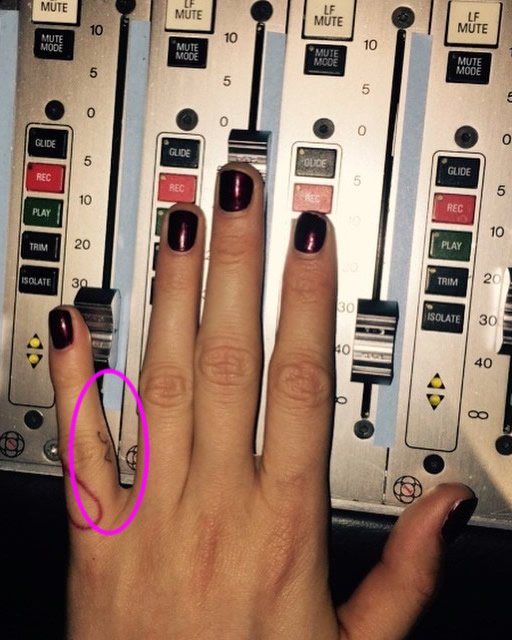 The rumor mill has been working overtime since Cara Delevingne and bestie Kendall Jenner allegedly got inked with each other’s initials back in December, but in a new Instagram photo posted by Cara last week, the British model showed off a new tattoo of someone else’s initials…St. Vincent’s Annie Clark, a 32-year-old American singer-songwriter. Cara Delevingne’s tattoo is inked on the inside of her left-hand pinky finger, the same finger as her red heart outline tattoo, and features the initials “AC” done in a simple black font.

Upon leaving the BRIT Awards in London on February 25, Cara Delevingne was spotted sharing a kiss with St. Vincent, real name Annie Clark, at the Universal Music after-party, and then sharing a taxi with the 32-year-old when they left the party at about 3:00 a.m. According to reports, Cara first met Annie back in December, and has been following the singer around the world on her tour, attending seven concerts in total, including shows in Tulsa and Tokyo, during the past four months.

In addition to following St. Vincent around the globe on tour, Cara Delevingne also reportedly went on vacation with the U.S. singer’s family in Bali, sparking rumors that the relationship between the two is getting pretty serious, an idea that Cara’s new tattoo seems to support. Just three days after she was spotted smooching with her reported new girlfriend at the Universal Music after-party, Cara posted an Instagram photo of her in the recording studio, hinting at a possible debut album, and in it, you can clearly see the “AC” initials tattoo on her finger.

While Cara Delevingne’s tattoo of Annie Clark’s initials appears to confirm rumors that the two are dating, remember that Cara also has a “DD” tattoo on her hip as a tribute to her friendship with fellow model and close gal pal Jourdan Dunn. In true “Don’t worry, be happy” Cara Delevingne style, as speculation about a possible romantic relationship between her and Annie Clark continues to mount, the model tweeted to her millions of fans this week saying, “Whatever makes you happy is most important. It doesn’t matter what anyone else thinks.”