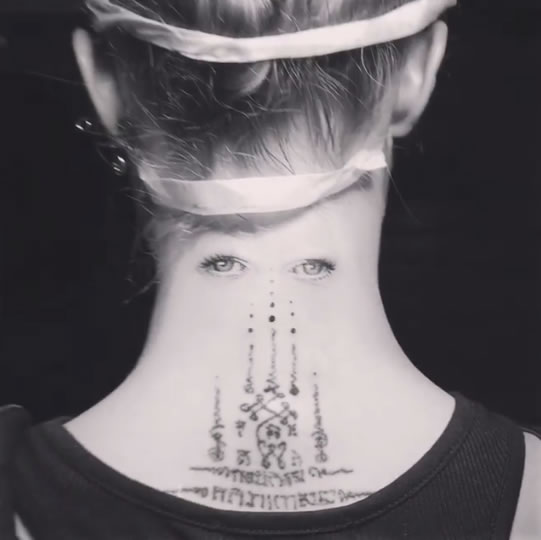 Cara Delevingne is all about unique, “eye-catching” tattoos, so when she decided to get her 26th piece, she turned to NYC-based tattoo artist Keith “Bang Bang” McCurdy, opting for a creepy pair of eyes on the back of her neck. Cara Delevingne’s latest tattoo features two eyes inked in black and gray below her hairline, just above the Thai yant tattoo on her neck that she debuted at her sister Poppy’s wedding back in May 2014.

Bang Bang is Cara Delevingne’s go-to tattoo artist, famous for his intricate images and ultra-realistic portraits, and this new tattoo on the model’s neck is no exception. The eyes in Cara’s tat appear to have been designed after an actual person’s, much like the eyeball tattoo Justin Bieber got as a tribute to his mother in July 2013, also courtesy of Bang Bang. The tattoo artist posted a video clip of Cara Delevingne’s new tattoo on Instagram on October 1, captioning the clip with a pair of eye emojis.

Cara has yet to discuss the meaning behind her neck tattoo, but some have speculated on social media that the eyes may have been inspired by St. Vincent, or Annie Clark, the singer that Cara has been linked to romantically for the past year or so. In a recent interview with British Vogue, Cara Delevingne opened up about her relationship with St. Vincent, saying, “I’m completely in love…Before, I didn’t know what love was – real love. I didn’t understand the depth of it. I always used to think it was you against the world. Now I know the meaning of life is love.” In fact, the model took the plunge last year and got an “AC” initials tattoo on her finger, so it’s possible she went the extra mile and got this eyes tattoo for St. Vincent as well.

On the other hand, recent news reports have suggested that Cara and St. Vincent have called it quits, and the model has since been linked to Suicide Squad co-star Margot Robbie. So, the meaning behind Cara Delevingne’s tattoo remains a mystery, for now at least. If nothing else, the model can now say that she has eyes in the back of her head…and actually mean it.