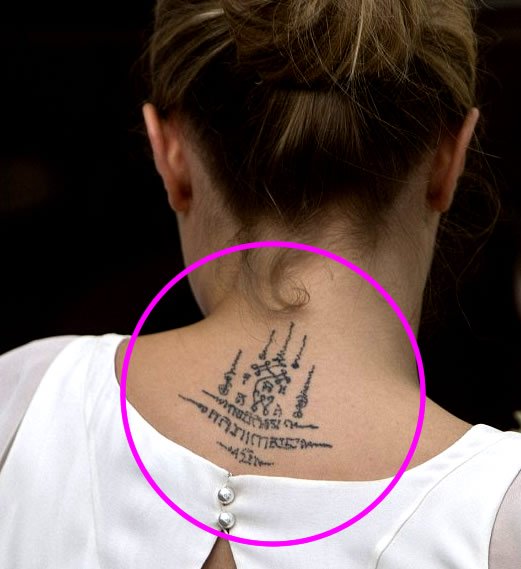 When Poppy Delevingne got married on May 16, it was a lavish affair with 17 bridesmaids and a few famous faces, but all eyes were on younger sister Cara, who chose the star-studded event to quietly reveal a brand new tattoo on the back of her neck. Decked out in an understated white Chanel gown with an open back and neckline that perfectly showed off the intricate ink on the upper part of the model’s back, Cara Delevingne looked beautiful as always, and the ornate neck tattoo design really complemented her delicate, flowing dress. So aren’t you just dying to figure out the meaning behind her new neck tattoo??

Although Cara Delevingne’s tattoos typically feature a simple design with a pretty straightforward meaning, such as the “Made in England” tattoo on the bottom of her foot and the “Don’t worry, be happy” tattoo below her breasts, this latest ink for the supermodel is far more intricate and mysterious. The fairly large tat is inked on the back of Cara’s neck or in the center of her upper back, and features a series of black squiggly lines and symbols that appear to be the markings of a foreign language. If we had to take a guess, we would say that Cara Delevingne’s tattoo is a prayer, saying or motto that describes the way the model chooses to live her life, much like her quirky “Don’t worry, be happy” chest tattoo.

It was almost exactly one year ago that Cara Delevingne went under the needle for the first time, and the supermodel has since added ten more designs to her body, many of which appear to have been inspired by gal pal and fellow tattoo lover, Rihanna. In fact, RiRi accompanied Cara when she had her first tattoo done – an ornate lion head on her index finger – and the diamond tat in the inside of Cara’s ear is rumored to have been a tribute to Rihanna, who was performing on her Diamonds world tour when the ear tattoo was revealed. We also know that RiRi is a fan of foreign language tattoos, which makes it all the more likely that she had a hand in Cara Delevingne’s neck tattoo. Stay tuned to learn more about Cara’s new ink!