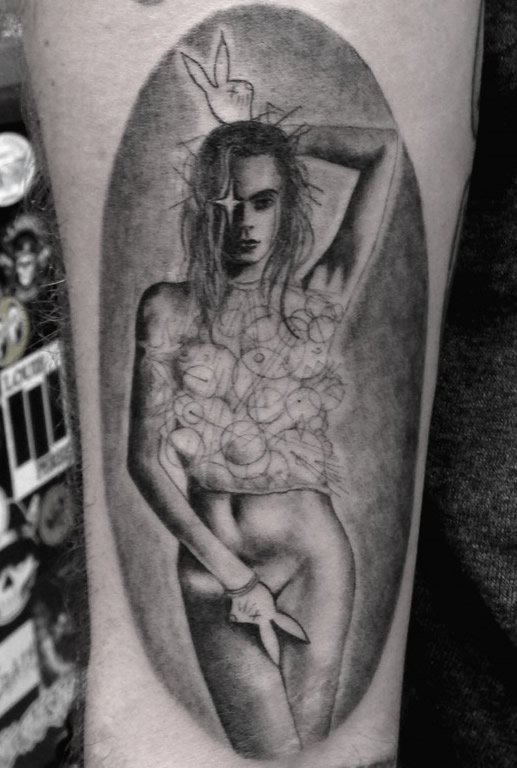 It’s official: Cara Delevingne has made it big! How do we know? Not because she represents top fashions houses like Burberry and Chanel, and not because she is considered Britain’s most successful model. We know Cara has made it big because she, like so many other lucky celebrities out there, has been immortalized in a super-weird fan tattoo. Cara recently posted to Instagram a racy photo of herself posing for a Garage magazine photo shoot, side-by-side with a black and white tattoo inked on the body of what must be the 21-year-old’s biggest fan. The weirdest part? The fan tattoo for some reason shows Cara sporting Playboy bunnies for hands, which makes the ink downright creepy.

Cara Delevingne is known for her quirky personality and somewhat kooky sense of humor, and the model was obviously impressed (or shocked) enough by this fan tattoo to re-posted the image on her own Instagram page. The Cara Delevingne tattoo was inspired by a Garage magazine cover the model recently did for the art and fashion publication, shot by photographer Nick Knight, which had her wearing nothing but fancy gold jewelry, a crown of thorns-type headpiece and a top that looks like it was made out of either feathers or plastic shopping bags. In the portrait, Cara covers her lady parts by making a peace sign with her right hand and has her left arm draped over her head, giving herself bunny ears and showing off her Pandora arm tattoo.

According to ShowStudio, Knight’s aim for the magazine spread was to “challenge fashion’s fleeting nature by creating an editorial built around a permanent form of art: tattoos.” Apparently, the mag was able to convince a handful of readers to get permanent tattoos inspired by Knight’s photos, including the risqué shot of Cara, inked by seven of the fashion industry’s favorite tattooists. The Cara Delevingne fan tattoo was inked by renowned tattoo artist Dr. Woo of Shamrock Tattoo in Los Angeles, a tattoo parlor responsible for inking some of our favorite pop stars, including Harry Styles, Louis Tomlinson and Rita Ora.

The translation of the Cara D. photo to fan tattoo is pretty spot on, capturing perfectly the model’s toned body, sultry stare and trademark eyebrows. But Dr. Woo definitely used some artistic license when inking the portrait, which resulted in “tattoo Cara” sporting Playboy bunnies for hands. Alright, we get it, Cara is giving herself bunny ears in the original photo and the racy portrait may be Playboy-worthy, but the two bunnies extending from Cara’s wrists in the fan tattoo turns what could have been a cool fan tattoo into a weird and borderline creepy image this poor person will have for the rest of his life.

Leave a reply in the comments section below telling us what you think of this Cara Delevingne tattoo!