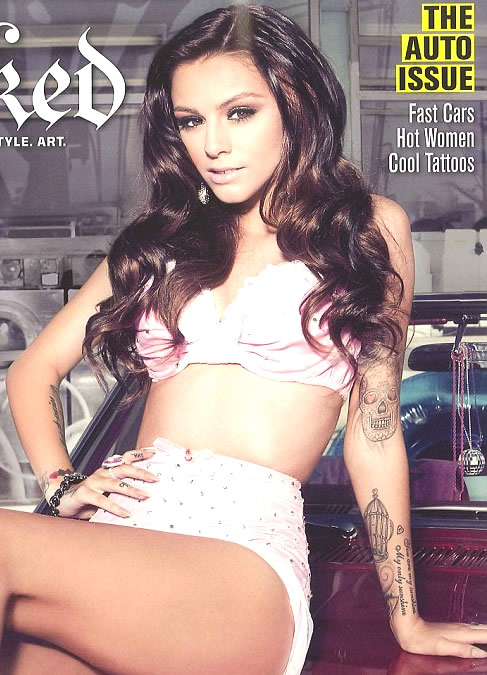 Cher Lloyd graces the cover of Inked magazine’s August issue in a skimpy pink outfit, and the singer’s numerous tattoos have never looked hotter! The former X Factor contestant poses on the beach and on the hoods of classic cars in the magazine’s auto issue, putting her 20+ tattoos on display, and, in the interview, talking about the inspiration behind her first tattoo – which she got when she was just 16! Like fellow X Factor contestants One Direction and Little Mix, Cher Lloyd has chosen to express herself through tattoos.  Much like One Direction member Harry Styles’ bird cage tattoo, Cher Lloyd’s sports an empty birdcage on the inside of her left arm. Her tattoo collection also includes a Mexican sugar skull tat (kinda like Miley Cyrus’ sugar tattoo on her ankle), the lyrics to “You Are My Sunshine,” butterflies and a bow on one of her fingers.

Cher Lloyd Got First Tattoo at 16!

“I was actually at school and had a lunch break so my mom took me to get a tattoo at a local artist’s house and then I went straight back,” Cher Lloyd says about getting her first-ever tattoo – a music note on her hand at the age of 16. “At the time I still hadn’t been on [X Factor] and the tattoo artist said to me that people wouldn’t employ me because I had a tattoo on my hand,” Cher reveals in the interview. It looks like Cher won’t have to worry about being employed though, since the pop star seems quite busy already, releasing albums and posing for magazine covers. And she also doesn’t plan on slowing down with the tattoos either. “I just want to be covered,” the pop star has said about her tattoo addiction, which began long before she was legally allowed to get inked. “It just carried on from there,” she says. “I got a bit addicted with it, and just kept going and going. But they all mean something to me, I don’t just get them for the sake of it.”

Cher Warns Against Getting Inked

One of Cher Lloyd’s most meaningful tattoos is the large birdcage she has inked on the inside of her left forearm. This particular piece was inked in memory of the singer’s uncle, who passed away following a methadone overdose in September 2010, while Cher was competing on the X Factor. “I remember growing up my uncle always had birds, and I thought that it would be interesting to do something different other than getting his name tattooed on me,” Cher explained. “I thought there was something special about leaving the cage door open and having the bird fly out the other side.” Although Cher Lloyd already has more than a dozen tattoos at the age of 19, she cautions young fans in the Inked interview not to rush into following in her footsteps. “It’s up to an individual to choose when they want to get a tattoo – and if you’re under the age – you should discuss it with your parents like I did.”