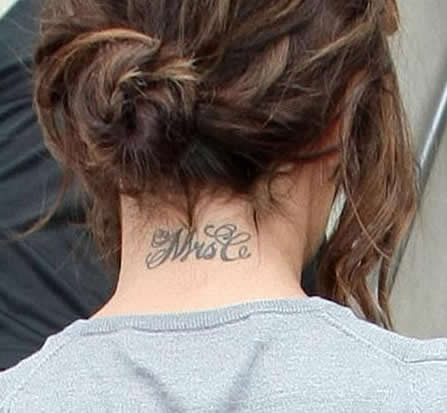 Following her split from footballer Ashley Cole in 2010, pop star Cheryl Cole said she planned to keep the “Mrs. C” tattoo on the back of her neck, but now that she has married again and changed her name to Cheryl Fernandez-Versini, rumor has it Cheryl Cole’s tattoo tribute to her ex-husband is on the chopping block. Some of you are probably wishing she would remove the gigantic English rose tattoo she had inked on her derrière last year, but we have a feeling that colorful masterpiece is here to stay. Instead, she reportedly plans to remove the last physical reminder of her former identity: Mrs. Cheryl Cole.

After dating for only three months, Cheryl and Jean-Bernard Fernandez-Versini married in a secret ceremony on July 7, 2014, and Mr. Jean-Bernard must not have been thrilled with the singer’s “Mrs. C” neck tattoo, because the pop star now plans to have it removed. This is probably a good move on Cheryl’s part, considering the fact that when the pop star wore a chic up-do to a London party on July 21 to celebrate her wedding to Jean-Bernard, she accidentally put on public display the tattoo tribute to her first husband on the back of her neck. Now that’s a mood killer, if you ask us.

Cheryl originally had her “Mrs. C” neck tattoo done in November 2007, one year after she married former husband Ashley Cole, and just two weeks before a hairdresser claimed to have had a one-night stand with the soccer player, which eventually led to the couple’s divorce in 2010. At the time of her split from Ashley Cole, Cheryl kept her ex’s surname and the neck tattoo that went along with it, saying, “I’m not ashamed of anything. I’ve got nothing to rub away. I don’t feel sentimental about the name. If I went back to being Cheryl Tweedy, I’d be…I’m not ashamed of my marriage, it’s a period in my life. And I am Cheryl Cole. That’s how I feel.”

Now that she has married French restauranteur Jean-Bernard Versini and changed her name from Cheryl Cole to Cheryl Fernandez-Versini, she obviously doesn’t consider herself “Mrs. C” anymore, so there’s no reason for her to hold on to the neck tattoo. We’re just hoping she doesn’t change her neck tattoo to say “Mrs. F-V” because: 1. That just doesn’t look right, and 2. Her and her new hubby have only known each other for a few months, and there’s no promise the marriage will last as long as a new tattoo.

So what do you all think? Will Cheryl Cole remove her “Mrs. C” neck tattoo completely or cover it up with more ink?