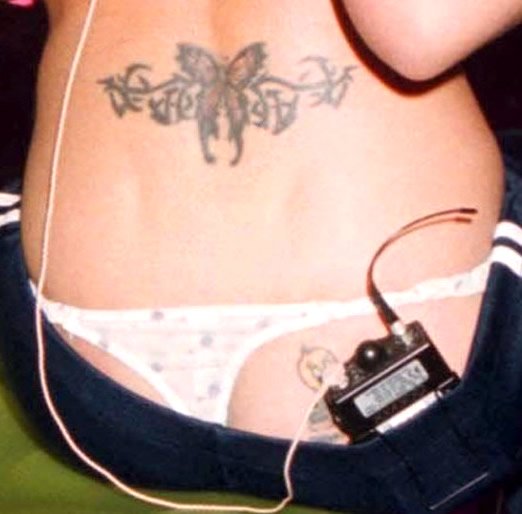 If you were wondering what drove singer Cheryl Cole to cover her lower back and entire backside with a huge roses tattoo, you’re not the only one who thought that was a pretty gusty move for the brunette beauty. We just recently discovered though, that Cheryl Cole’s gigantic tattoo of red English roses was actually inked to cover up two tattoos previously located on the pop star’s back and right cheek. When we heard this news, we assumed the covered-up ink must have been a tribute to former boyfriend Tre Holloway, with whom Cheryl split earlier this month after dating for more than a year, but that’s not the case at all. They were, in fact, a tribal butterfly tattoo and an image of the cartoon character Tweety Bird. No, we’re not kidding.

Cheryl Cole made headlines, and rightfully so, when she revealed in August the true size of her English roses tattoo, which was originally inked back in March 2013 by tattoo artist Nick Hurtado of California’s Black Anchor studio. The singer received some serious backlash over the extensive tattoo, which some people thought was just too much, but fought back against critics saying: “People are entitled to their own opinion. Personally I’ve never really concerned myself with other people’s body parts!” Still though, it’s hard not to gawk at the gigantic tat inked on Cheryl’s petite frame, which fellow Girls Aloud member Sarah Harding recently revealed was actually a cover-up. “Rosy isn’t it,” Harding joked about Cheryl’s tat. “It gives a new meaning to rosy-cheeked!”

During a recent interview with OK!, Sarah Harding, who has quite a few tattoos herself, went on to say, “Yeah [Cheryl] was [hiding something]. I knew what used to be there. Only I knew…and the rest of the girls!” Well, now we know too Cheryl, although we’re wondering what convinced you to get a tramp stamp of a tribal butterfly and a Tweety Bird tattoo in the first place?? Sarah also echoed tattoo artist Nick Hurtado’s comment about Cheryl Cole being “tough as nails” to sit through a tattoo that took a total of 15 hours to complete. “I don’t think I could do it,” Cheryl’s Girls Aloud bandmate said. “Each phoenix [in her back tattoo] took about four hours. I could only do two hours at a time.” We have to admit, we were a little unsure about the pop star’s gigantic roses tattoo, but now that we know what was underneath it, we’re glad she chose to cover those awful tattoos up!