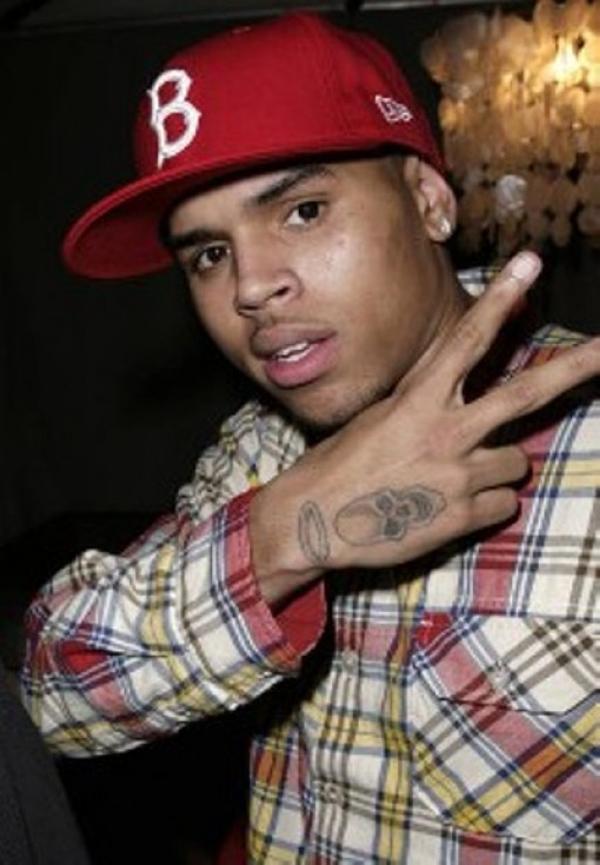 Ever since getting his first tat at age 13, Chris Brown has been adding more and more tattoos to his collection, gradually covering up nearly every bit of skin on his body, inch by inch. Chris Brown’s most impressive tattoos are probably the tats he has inked on his arms, since the full sleeves reach up from his wrists and extend across his shoulders, meeting up with his large chest tats. When he ran out of room on his arms though, the singer was not discouraged. He simply started inking up his hands. You’d think the hands would be a strange and painful spot to get a tattoo, but Breezy’s hand tattoos are some of his most popular pieces of body art. It seems like Chris Brown’s hand tats may be some of the R&B star’s most meaningful tats as well, since they aren’t completely surrounded by other tattoos and are almost always visible.

One of the earliest of Chris Brown’s tattoos is a hand tat featuring a skull with halo inked above it. You can tell that Chris’ hand tattoo was one of his first tats ever because early pics of the singer show the skull tat and arms that are amazingly free of tattoos! According to Chris Brown, he got the skull tattoo on his hand the day after he turned 18, which means he waited five years between his first (Jesus on his arm) and second tattoo (skull on his hand). Chris Brown’s skull tattoo is inked in black and white and located on his right hand below his ring and pinkie fingers, with the halo landing on his wrist. “I got it the day after my 18th birthday and it signifies when you die, when you’re buried, your flesh deteriorates and all that’s left is your bones and the memory of you, it’s your bones but you an angel.” Chris explained. “I wanted to do something not demonic, so I put a halo over it to make it something positive.” 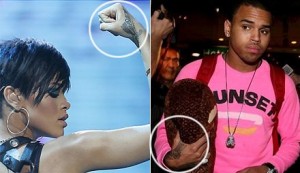 Another one of Breezy’s hand tattoos is just as interesting but is far less talked about than his skull tat. It’s a Maori tattoo inked on his right hand, in the same spot where Chris Brown’s ex, Rihanna, also has a Maori tat inked. Apparently, while touring in New Zealand, Rihanna and Chris Brown got matching Maori tattoos inked on their hands in November 2008, the same year the former couple got matching star tattoos on their necks. While Rihanna’s dragon claw tattoo on her hand is inspired by a traditional tribal design representing love and strength, the image in Chris Brown’s hand tattoo looks like a hibiscus flower with leaves extending from his wrist to the space between his thumb and forefinger. 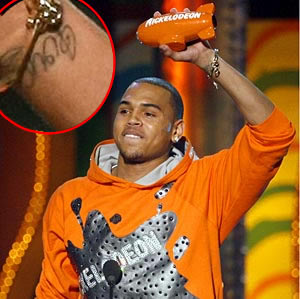 What do you think Chris Brown did to apologize to his mom for getting an arm tattoo at age 13, against her wishes? He got a tattoo for her, of course! The singer has a tattoo on the inside of his left wrist that features his mom’s name, Joyce, inked in cursive font. It’s kinda nice that Chris’ wrist tattoo for his mom is located in a spot all by itself without any other tats around it, although it may not stay that way for long. Breezy’s mom obviously plays a big role in his life, both personally and professionally, since she is also his manager. She apparently weighs in on Chris’ actions as well, and was reportedly livid when the singer tweeted the controversial message, “Hate all u want becuz I got a Grammy now! That’s the ultimate F**K OFF!” after winning a Grammy for best R&B album in February 2012. According to an insider, “Joyce is absolutely livid that those vile words and rants were posted on Chris’ Twitter page. She feels like people were just waiting for a negative reaction.” Well, hopefully Chris’ hand tattoo tribute makes up for his Twitter mishap!