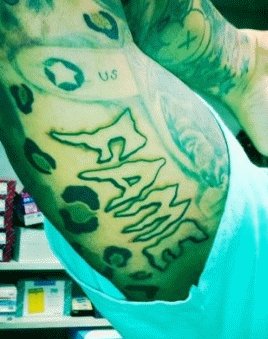 There’s no denying that Chris Brown’s arms are the most tatted up part of his body, and we’re not surprised, since he got his first arm tattoo at age 13 and hasn’t stopped since. Some of Chris Brown’s sleeve tattoos are easy to interpret, such as the image of Karreuche Tran’s face on his arm, while others take having a little more knowledge about the singer to figure out. Breezy’s sleeve tattoos may seem like a jumbled mess to some people, but each of his arm tats means something important to the singer. For example, just by looking at Chris Brown’s arm tattoos you might be able to figure out a little something about his religious beliefs, where he grew up, how he views himself, who he has fallen in love with, and what he has struggled with in life. Not so much? Well then read on to learn all about the singer’s arm tattoos, which ones he designed himself, and what they all mean to him personally.

One of the most prominent tats on Chris Brown’s arms is probably the “FAME” tat he got inked on the inside of his left bicep in July 2010. Although the singer probably does enjoy his fame enough to get it inked on his body, the arm tat is actually an acronym for “Forgive All My Enemies,” which is also the name of the R&B star’s Grammy-winning album. Some people also think Chris Brown’s tattoo could mean “Fans Are My Everything,” but that sounds like wishful thinking to us! 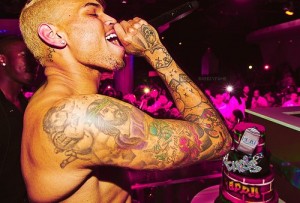 Another one of Chris’s sleeve tattoos is the image of Jesus he got inked on his arm when he was only 13. “On my 13th birthday I was like, ‘Mom, I want a tattoo,” says Chris Brown. “She’s like ‘You ain’t gettin’ no tattoo!’” But Chris Brown went against his mother’s wishes and got a Jesus tattoo inked on his right arm anyway, and surrounded him with music notes. “That first one is basically Jesus with the music notes signifying he gave me the gift to sing,” the singer says of his arm tattoo. 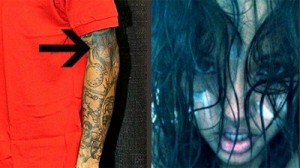 One of Chris Brown’s more recent sleeve tattoos is the image of his former girlfriend, model Karrueche Tran, which he added to his left elbow in January 2012. Breezy’s arm tattoo of Karrueche Tran is a replica of a photo shoot image in which Miss Tran is wearing war paint on her face and has tousled wet hair partially covering her face. The original picture is pretty cool, but Chris Brown’s tattoo is kind of a miss. If you’re surprised Chris got a tattoo dedicated to a woman, don’t be. Chris Brown also has tattoos that match on-again-off-again girlfriend Rihanna’s tattoos, including the stars tattoo on his neck and his Maori hand tat.

Chris Brown dedicated the space directly below his Jesus tattoo to a large arm tat featuring two ninjas battling one another, along with the text “Darkness to Light” scrawled across the image. According to Chris, the ninja tattoo on his arm represents how he went from hanging around with a bad crowd when he was younger to finding his own positive path in life. Hence, from darkness to light. 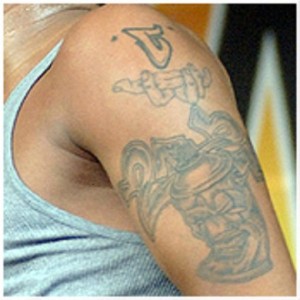 When he was only 14, Chris Brown got an arm tattoo inked on his upper left arm that he designed himself, featuring a hand holding the letter “C” in a graffiti design. Breezy says of his one-of-a-kind arm tattoo, “The hand means me holding my own name, my own destiny.”

At 16, Chris Brown opted for another sleeve tattoo, this time in honor of where he grew up, Virginia. “I had to do one for Virginia, when I was 16, in Miami,” the singer says. Breezy’s sleeve tattoo in honor of Virginia is also inked on his left arm and features the number 2 with an arrow pointing up and another

number 2 with an arrow pointing down. The singer’s arm tattoo also includes a spray can because he enjoys doing graffiti as an art form.