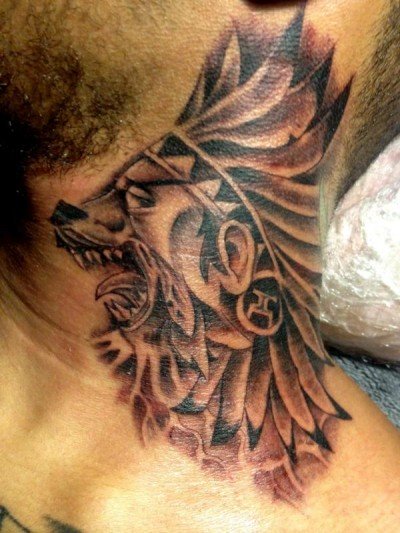 Just when you thought the R&B star couldn’t fit any more tats on his upper body, Chris Brown got a new tattoo on his neck! He hasn’t gone public with his tattoo meaning yet, but rumor has it Chris Brown’s new tattoo is a jab at Drake, who was involved in the brawl with the 23-year-old in a New York City club last month. Check out Chris Browns neck tattoo and decide for yourself if the scary tat was meant to intimidate Drake or not.

Just a couple days before he was set to hit the stage at the BET Awards, Chris Brown hit the tattoo parlor and got a new piece inked on the left side of his neck. Chris Brown’s neck tattoo is inked in black and white and is apparently meant to represent “an Indian chief transforming into a wolf.” The new neck tat features a face that is half-human, half-wolf, complete with a full Indian headdress. The mouth of the wolf-man in the Chris Brown tattoo sports some nasty-looking sharp teeth in a full-on snarl, and there is an unidentifiable symbol behind the figure’s left ear. Chris Brown has stayed quiet about his tattoo meaning, but numerous media outlets have claimed the new neck tat has something to do with the recent brawl between the singer and Canadian rapper, Drake.

In mid-June, Chris Brown and Drake were involved in a highly-publicized fight that broke out at the SoHo club called W.i.P. in New York City. Preliminary reports about the serious club brawl claimed that an argument about Chris Brown’s ex, Rihanna, is what prompted the fight, but it’s still unclear what spurred the nasty confrontation. Although both Drake and Chris Brown, who shares a similar neck tattoo with Rihanna, dated the pop queen in the past, Chris Brown claims RiRi had nothing to do with the altercation. Regardless of what the argument was about, Chris Brown is obviously unable to hide his dislike for Drake, evidenced by Brown’s new release, “I Don’t Like,” in which he flat-out disses the rapper. So, is it possible that the new Chris Brown neck tattoo is also meant as a Drake diss? 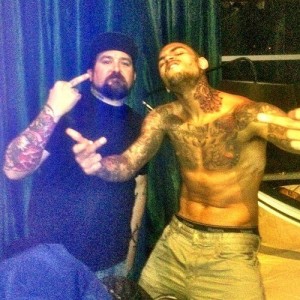 The tattoo artist responsible for inking Chris Brown’s new tattoo is Peter Koskela of Black Banditz Tattoo on Melrose in Los Angeles. Koskela tweeted a pic of Chris Brown under the needle, and the R&B star didn’t seem too concerned about the intricate neck tat, since he apparently fell asleep during the five-hour-long process. 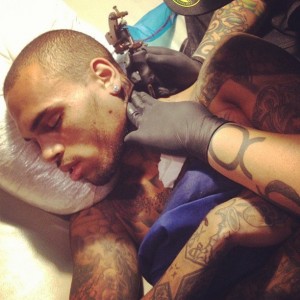 When the new Chris Brown tattoo was finally finished, Koskela celebrated its completion by posing with the singer, who was putting some serious effort into flipping the bird with both hands. Although Koskela is the one who identified Chris Brown’s neck tattoo as an Indian chief/wolf, mid-transformation, little else has been divulged from the singer or his posse about the new tat. If you’re curious about the meaning of Chris Brown’s tattoo, check back with us soon and we’ll keep you in the know!