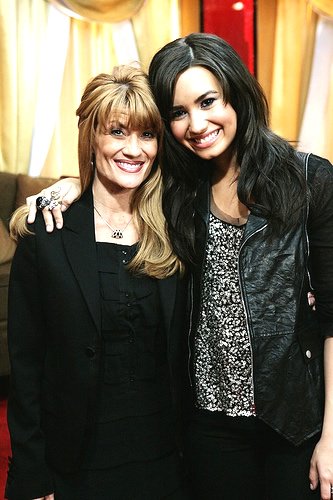 Pop star Demi Lovato got into such a big fight with her mother over the giant birds tattoo she recently got inked on her arm that she had to walk out of her parents’ house. Apparently, Demi and her mom, Dianna Hart, just don’t see eye to eye when it comes Demi’s impressive collection of tattoos, which isn’t too surprising considering the singer already has 12 tats at the young age of 20. Have no fear though, the disagreement with her mother certainly won’t stop Demi Lovato from getting inked in the future! Just last year she admitted that she regrets some of her tattoos and said she plans on getting some removed when she is older, including the tiny “rock ‘n roll” tattoo on her finger. However, when it comes to new artwork, the inked-up pop star says bring it on!

It was in November 2012 that Demi Lovato debuted one of her largest tattoos to date – the string of birds she has inked across the outside of her right forearm. The artist responsible for the arm tattoo is Miami Ink‘s own Kat Von D, who also recently inked the crossed arrows tattoo and anatomical heart tattoo on Miley Cyrus’ arm. Demi’s arm tattoo is really quite beautiful and features a string of 12 birds in flight, beginning just below her “faith” tattoo and curving up to meet the word “Strong” Demi has inked on her right wrist. Just ’cause we love Demi’s birds tattoo though, doesn’t mean her mom does!

Apparently, Dianna Hart was horrified when she saw the prominent tattoo on Demi Lovato’s arm and didn’t talk to her daughter for a day or so after she got it inked. “I went over to my mom’s and I had [the birds tattoo] bandaged up, which probably made it look bigger than it was, so she just thought I’d got a half sleeve or something,” Demi said during a recent interview with Heat magazine. Needless to say, “she didn’t react well and I ended up leaving,” Demi said. “It was pretty bad.”

Demi Lovato’s Tattoos Are a Work of Art

It’s obvious from her tattoo choices that Demi Lovato considers tattoos an art form, but her mom just doesn’t seem to be on the same page. “She has a different perception of tattoos than my generation does,” Demi explained when talking about her mother’s reaction to the ink. “And so it’s hard to explain to her that it’s like art for your skin and you don’t have to draw it on every day. It’s something that’s meaningful.” Although her parents aren’t thrilled about the large addition to Demi Lovato’s tattoo collection, they apparently don’t mind as much when their daughter gets more discreet tattoos, like the tiny “peace” and “rock ‘n roll” tats the pop star has inked on her fingers. Demi’s mom can’t be that against tattoos though. The 50-year-old actually got a tattoo matching Demi’s “stay strong” piece when the singer was in rehab in May 2011, on Mother’s Day. Now that’s a supportive mom!