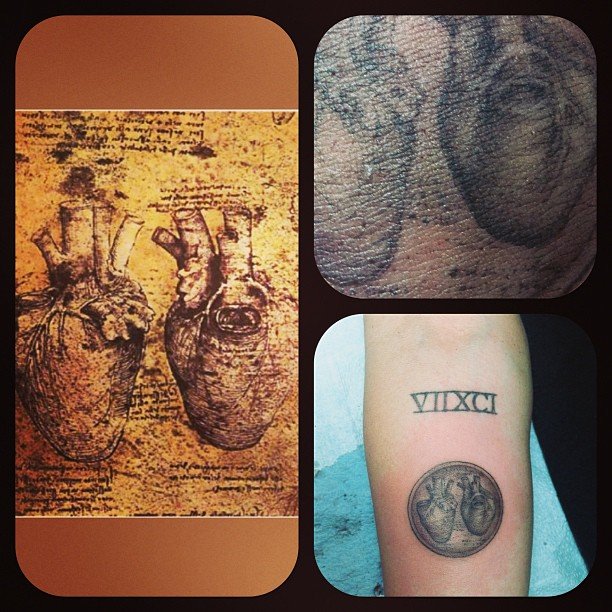 Miley Cyrus and Kat Von D have paired up for yet another tattoo on the recently engaged pop star, this one on her right forearm, just below Miley’s roman numeral tattoo. A black and white reproduction of Leonardo da Vinci’s sketch of the human heart from around 1510 was the inspiration for her new arm tattoo. Da Vinci was known to be fascinated with human anatomy, and often performed highly secretive (and illegal) autopsies to explore the body and find out how it works. Kinda an odd, and maybe a little cryptic, choice for a new tat. Tell us what you think!

Miley casually stopped in to Kat Von D’s studio, High Voltage, in Hollywood yesterday for just a brief time. Sources say it looked like she was just hanging out for a bit, but it looks like she and Kat were getting down to business. The ancient drawing featured in Miley’s arm tattoo depicts two 3D views of a the ‘ole chest beater. The little tattoo must not have taken very long to ink; it is only black but shows a great deal of detail. Super impressive, Kat!

The new tattoo comes on the heels of several break-up rumors with future hubby Liam Hemsworth…will this tattoo squash the those nasty rumors? We think so. Just before Kat Von D tweeted about the pop star’s latest ink, writing: “Just did the RADDEST tattoo on @MileyCyrus -a miniature rendition of a da Vinci anatomical heart!” Miley expressed that “everything is fine” with her and Liam. So, is the new heart tattoo a tribute to the love they share? Could it mean, as one of Miley’s Twitter followers proposed, “two hearts beating as one?” We’re waiting to hear from Miley herself to unveil the meaning behind her new heart tat, so stay tuned!