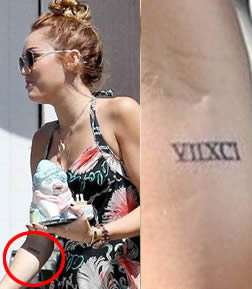 Update: Miley Cyrus’ Roman numeral tattoo actually stands for the date 7/91, which is the month and year that her parents Tish and Billy Ray first met. The Cyrus family has been on a bit of an emotional rollercoaster these days, with Miley’s parents calling off their second divorce filing in three years back in July 2013. The first hint of marriage trouble was back in 2010, when Billy Ray filed for divorce, but the couple reunited a year later, only to have Tish file for divorce yet again. With these emotional ups and downs, it makes sense that Miley would want a reminder of what her parents used to have permanently inked on her body.


Apparently Miley Cyrus’ New Year’s resolution involved getting more new tattoos than any other celebrity, because the singer got a new tattoo in May 2012, and we’re here to tell you all about it! Read on to see a pic of Miley Cyrus’ tattoo and find out everything we know about it so far. Be sure to check back soon though, because Miley’s tattoo meaning is still a bit of a mystery, and we’ll keep you updated as more information is revealed about the new ink.

Leave it to mysterious Miley Cyrus to get a cryptic new tattoo and not tell anyone what it means. In May 2012, Miley Cyrus inked a tat on the inside of her right elbow that reads “VIIXCI” in Roman numerals, but she hasn’t yet spoken in public about the ink. We’ve decoded the singer’s Romal numeral tattoo and discovered that the tat includes the numbers “5, 1, 1, 10, 100 and 1, but there doesn’t seem to be any rhyme or reason for the tat. Since “VIIXCI” is not a valid Roman numeral on its own, and because Miley put all the different numbers next to one another without any spaces, there are plenty of different interpretations for the tattoo. We could assume that Miley Cyrus’ new ink was inspired by Rihanna’s Roman numeral tattoo and speculate that it represents a date like Rihanna’s does (her best friend’s birthday).