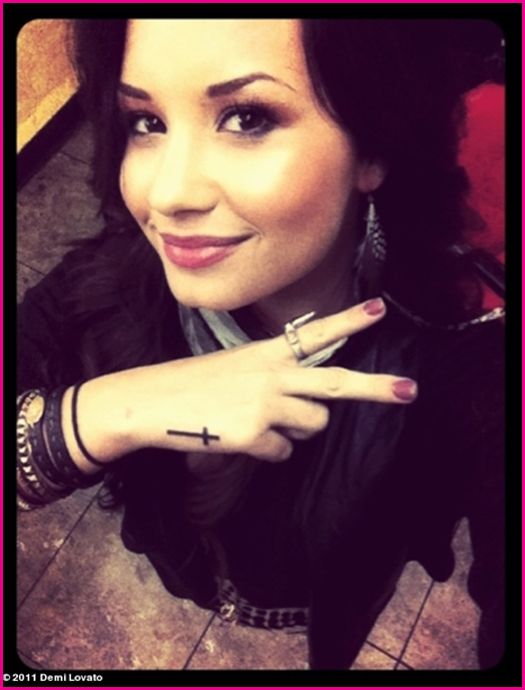 Shortly after leaving rehab, Demi Lovato got a tattoo of a small black cross inked on her right hand. The religious symbol is one of her smallest tattoos, but it packs a big punch, especially because the location is less than discreet. According to Demi, she is a devout Christian and she wants her cross tattoo to be seen clearly whenever she is holding a microphone…or making a fist, or holding up her hand in any way, shape or form. In short, Demi Lovato’s cross tattoo can’t be missed. Read on to learn more about it!

Only three months after getting her “Stay Strong” tattoo Demi Lovato decided that she wanted more ink. So, in June 2011, the pop star got a tattoo of a small black cross inked on the outside of her right hand, just below her pinkie finger. Demi showed off her fresh hand tattoo during a session of “On Air with Ryan Seacrest,” while being interviewed about her time spent in treatment, and other difficulties she has endured since leaving the Timberline Knolls facility last year. It’s obvious that Demi loves tattoos, and we’re sure she hasn’t finished inking up her body, despite her recent claims. “I have to stop!” she laughs. “I’m going to be covered in tattoos.” She’s certainly well on her way!

The Meaning Behind Demi Lovato’s Tattoo

According to Demi, the cross tattoo is a symbol of her devout Christian faith, and she got it on her right hand because she wants her fans to see it clearly every time she holds a microphone. Demi reportedly opted for the cross tat on her hand after she broke up with former beau Wilmer Valderrama and her mother checked into rehab, which prompted rumors that Demi was getting inked as a way to deal with all the stress in her life. “I’m very impulsive when it comes to [getting tattoos]” said Demi. “For fun, me and friends will be like ‘let’s go get tattooed!’” Pictures of the cross tat surfaced on Twitter shortly after the tattoo was inked, along with the caption, “Getting mo ink…Peace, Love & Jesus…Whhaaatt?!”

It’s obvious that Demi Lovato has a close relationship with God just by looking at the tattoos she has gotten over the past few years. Back when she was only 16, Demi got “you make me beautiful” inked in a tattoo located on her right side, which she added feathers to several years later. Although Demi Lovato’s you make me beautiful tat may not seem to have anything to do with religion, Demi herself explained, “The words were so encouraging and lifted me through a really dark time in my life. It’s kind of a Christian tattoo, so for me it’s religious, but it could be for anybody.” Only six months after getting her cross tat, Demi Lovato also got “faith” inked on the outside of her right arm, near her elbow. So, just to be clear, there’s no question about Demi’s religious beliefs. 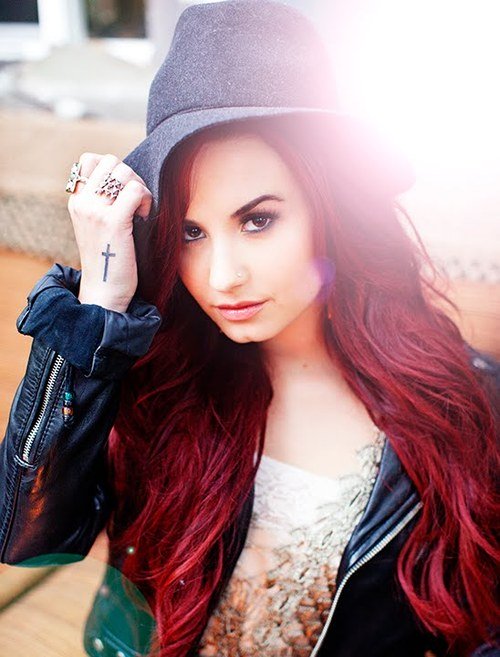 Demi Lovato isn’t the only singer/actress to get a cross inked on her body. Back in December 2010, teen superstar Miley Cyrus added to her impressive finger tattoo collection by getting a tiny black cross inked on the inside of her right ring finger. In fact, Miley’s cross tattoo looks an awful lot like Demi’s! Another famous female who recently got a cross tattoo is Rihanna, who happens to be Demi Lovato’s role model. Rihanna’s cross tattoo is small and discreet and is inked in red on her left collarbone. Maybe the reason Demi got the cross tattoo is that she was looking for a higher form of support during her long-term struggle with bulimia and cutting. “I cannot tell you that I have not thrown up since treatment,” said the 19-year-old singer/actress. “I cannot tell you that I have not cut myself since treatment. I’m not perfect. This is a daily battle that I will face the rest of my life.” Fortunately though, Demi is determined to turn her struggle into inspiration for other young girls. “I continue to work my butt off because now I want to be a legitimate role model.”