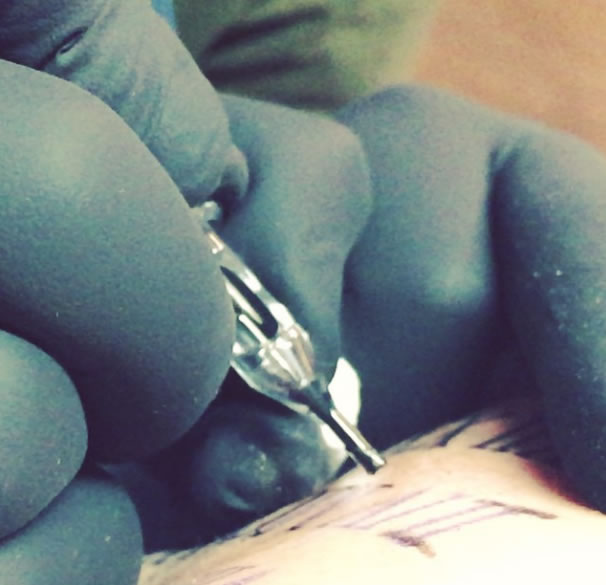 Demi Lovato recently posted a video on Instagram of her going under the tattoo needle, and while the tat is actually one she got back in November, the slow motion vid gives us a rare up-close-and-personal look at the pop star’s tattoo session. The video of Demi Lovato’s tattoo was posted on Instagram on January 24, and shows celebrity tattoo artist Keith “Bang Bang” McCurdy working on the Roman numeral birthdays tattoo on her ribcage. Demi Lovato’s Roman numeral ink marked tattoo number 15 for the “Warrior” singer, and illustrated the close connection she has to her mom Diana, sisters Dallas and Maddie, step-father Eddie, and biological father, Patrick.

We have no idea why Demi Lovato waited so long to share this video of her Roman numeral birthdays tattoo session, but it’s pretty cool that the singer is giving us such a rare and personal look at something she obviously holds close to her heart. Demi has never been shy about getting tattoos and posting pictures of them online, but the fact that we get to see the actual process of her going under the needle for her Roman numeral birthdays tat is pretty awesome! Demi captioned the Instagram video, “Before #FBF is over…Getting some ink done after a show last summer till 5 am…Shoutout to the best tat artist in NYC @bangbangnyc #slowmotion.” Bang Bang himself reposted the video on January 26, along with the caption, “I [love] @ddlovato.”

Bang Bang is one of the most sought-after celebrity tattoo artists in the country, and has inked the likes of Rihanna, Cara Delevingne, Rita Ora, Justin Bieber and Demi Lovato. There’s no doubt that he is an incredibly talented tattoo artist, and this new Instagram video of him tattooing Demi Lovato is pretty intense. And because Demi slowed down the clip, you can actually see each and every time the needle makes contact with her skin, and understand what really goes into inking such an intricate tattoo. Some people may be skeeved out by this new Demi Lovato tattoo video, but we think it’s pretty darn cool!