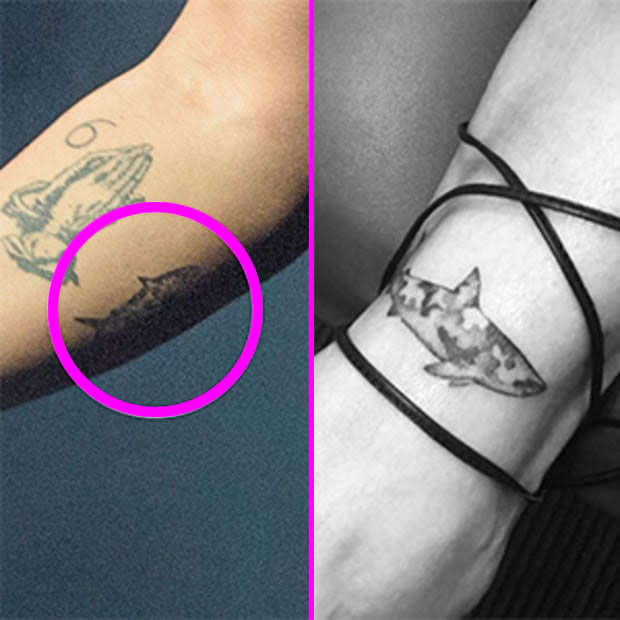 Just one day after Bang Bang revealed the camouflage shark piece he tattooed on Rihanna’s ankle in Drake’s dressing room during the Miami stop of the rapper’s Summer Sixteen tour, some fresh ink was spotted on Drake’s arm, and guess what?? It matches Rihanna’s tattoo! Drake’s new tattoo was spied on September 2, while Drake was performing in New Orleans, and appears to be an exact replica of the camo shark RiRi now rocks on her left ankle.

There’s no doubt that fans of RiRi and Drake want the two to be together, and these matching shark tattoos should definitely give Rihanna and Drake shippers some fresh ammo. Rihanna’s tattoo, and possible Drake’s as well, was done in the aftermath of the MTV VMA Awards, where Drake professed his love for RiRi, while presenting her with the Video Vanguard Award. Drake admitted in his speech that he has loved Rihanna since he was 22 years old, and RiRi appeared to share the sentiment last week, when she kissed Drake onstage during a show in Miami. 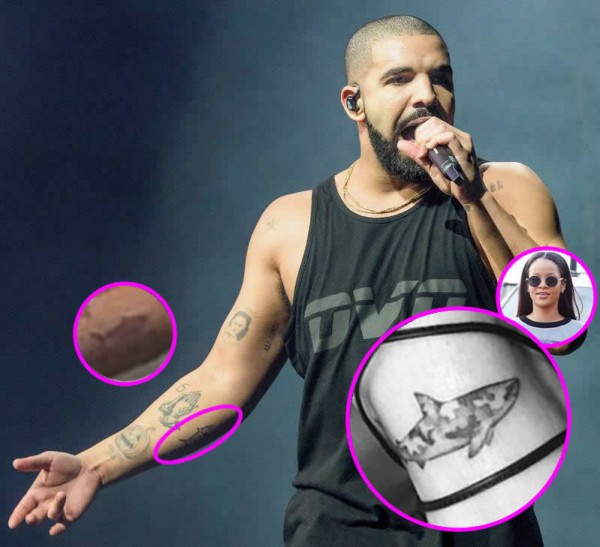 Although Rihanna has yet to reveal the meaning behind her shark tattoo, it was reported by Vanity Fair that the design was based on a camouflage shark stuffed animal Drake gave her during a midnight dinner date at the aquarium in Toronto back in August. Aww!! Being that Rihanna’s shark tattoo was inked by Bang Bang in Drake’s dressing room in Miami, our guess is the celebrity tattoo artist is also responsible for Drake’s tattoo, inked on his right arm, next to his praying hands and “6” tattoos. What do you all think of these matching shark tattoos??