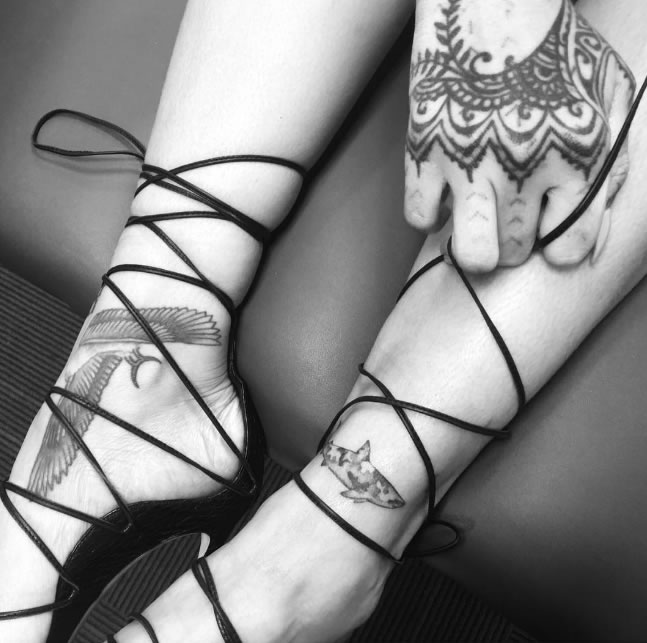 **Update: According to a new Vanity Fair article, Bang Bang inked Rihanna’s shark tattoo in Drake’s Miami dressing room, and rumor has it, the ankle tat was inspired by a stuffed shark Drake got for RiRi during a midnight dinner date the two had at the aquarium in Toronto last month!

Celebrity tattoo artist Bang Bang posted a video clip on Instagram September 1, and in it, a tattooed Rihanna laces up her strappy stilettos overtop of a piece of tape covering her left ankle, a piece of tape that can only mean one thing – that Rihanna has a new tattoo! Several hours later, Bang Bang posted a photo of RiRi’s latest tattoo, located just opposite the “1988” tat he inked on her right ankle last August, and it turns out the pop star’s mysterious ink is a pretty bad-ass camouflage shark! Bang Bang captioned the photo of Rihanna’s tat, “Camo shark for my dear friend @badgalriri Also…I just found out you can zoom on IG-enjoy :).”

Rihanna’s new tattoo comes a little over a year after her last tat, and in the midst of rumors that the pop star and Drake are officially an item, a rumor that RiRi all but confirmed by kissing the rapper onstage during the Miami stop of his Summer Sixteen tour on August 31. The evening before Bang Bang shared the video featuring Rihanna’s new tat, the singer was spotted leaving the E11even Nightclub in Miami in the same stiletto heels, a revealing black dress, and a tell-tale protective covering on her ankle. Drake was just a few steps behind RiRi as she exited the club, and they were clearly having a good time together. The two were obviously enjoying one another’s company last Sunday as well, following the MTV VMA Awards at Madison Square Garden in New York, where the two put their affection on display while partying at the after-party for Drake’s show. 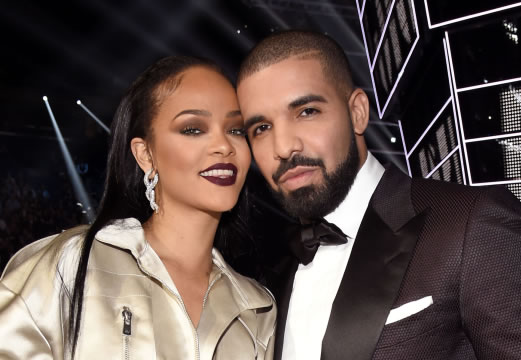 According to one source, Rihanna and Drake, who have been romantically involved on and off for years, are “definitely a couple,” and, at the VMA’s after-party on Sunday night, the two singers were all but inseparable. Who can blame Rihanna for digging Drake though? After all, the rapper did profess his love for the Bajan beauty while presenting her with the Michael Jackson Video Vanguard Award at the end of the VMA’s, saying, “She’s someone I’ve been in love with since I was 22 years old. She’s one of my best friends in the world. All my adult life, I’ve looked up to her, even though she’s younger than me.”

Rihanna has yet to reveal the meaning behind her shark ankle tat, but tattoos of the creatures traditionally represent power, dominance and aggression, three qualities that the international superstar definitely possesses. Let us know what you think of Rihanna’s new shark tattoo in the comments section below!