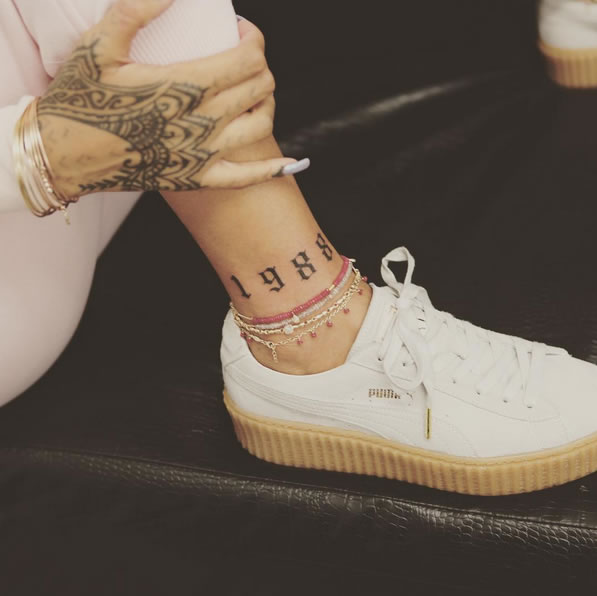 Well over a year after getting her last tattoo – a large, ornate cross tat on the inside of her wrist – inked-up pop star Rihanna has FINALLY gone back under the needle, this time opting for a pretty bad-ass “1988” tattoo on her ankle to commemorate the year she was born. Rihanna’s tattoo, which is her 24th piece to date, features the year of her birth “1988,” inked in a bold black Gothic font encircling her right ankle, and hopefully ends the singer’s drought when it comes to new artwork.

On August 12, Rihanna was photographed hanging out with rapper Travis Scott at the Bang Bang tattoo shop in the East Village of New York City, but it wasn’t until August 13 that the pop star unveiled the new ink on Instagram, captioning the photo of her ankle piece, “killz. Tagged by my dear friend @bangbangnyc,” with two eight ball emojis. Rihanna’s go-to tattoo artist, the infamous Bang Bang, also uploaded a photo of Rihanna’s tattoo to Instagram that same day, and he captioned the pic, “@badgalriri like I told you last night – you’re my favorite person to tattoo ‘1988.’”

The fact that Bang Bang called Rihanna his “favorite person to tattoo” means a lot, because Bang Bang’s work is favored by plenty of tattoo-loving celebrities, including Miley Cyrus, Cara Delevingne, Lady Gaga and Justin Bieber. It’s clear though, that Rihanna and Bang Bang have a pretty special relationship when it comes to ink, and the tattoo artist is responsible for some of Rihanna’s most detailed tattoos, including her Egyptian falcon ankle tattoo, her string of stars neck and back tattoo, and the “rebelle fleur” tat on her neck.

Prior to getting this new “1988” tat on her ankle, Rihanna had taken a pretty long hiatus from tattoos, and the last time she got inked was way back in January 2014, when Bang Bang did the elaborate cross tattoo on the inside of her right wrist, on the same hand she rocks her intricate henna-style “glove” tattoo. No doubt Bang Bang keeps himself pretty busy inking up some of our favorite pop stars, but according to his Instagram post, Rihanna is still his number one client!