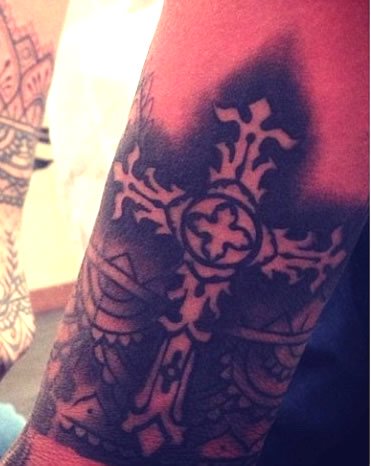 Rihanna and Bang Bang are up to it again, this time adding a new and elaborate cross tattoo to the inside of her right wrist. On Saturday January 11th Rihanna visited Bang Bang Tattoos around midnight, after a Brooklyn Nets – Miami Heat game, and didn’t re-emerge until 5am, admiring her fresh ink. The new tat is on the under-side of her recent and even more elaborate henna-style tattoo that she had done to cover/compliment the Maori tribal hand tattoo which was inked using a only a chisel and hammer, traditional tribal style, back in October 2013. Judging by the pics, Riri seems very satisfied with her new artwork, what do you think? Let Rihanna know what you think of her latest wrist tattoo in the comments below!

This is Rihanna’s second cross tattoo that she has had inked. Her first was a tiny cross tat she had inked in red on her collar bone way back in March of 2012. While most would assume the tattoo would represent her religious beliefs, there was some controversy surrounding the red ink used in the small cross tat as it may in fact symbolize godlessness and pagan practices, frequently being used by the Freemasons. We guess this new cross tattoo on her wrist makes it quite clear that both of her crosses are meant to celebrate Rihanna’s faith.

Her cross tattoos are not the only religious ink Rihanna is sporting these days. Her first was a Sanskrit prayer inked down the side of her right hip, which was supposed to mean “forgiveness, honesty, suppression, and control” but wound up reading “long suffering, truthfulness, self-restraint, inward calm, fear and fearlessness” due to an unfortunate misspelling.

Her second religious-themed tat was an Arabic tattoo on her ribcage that translates into “Freedom in God” which some take to actually mean “Freedom in Christ.”

This latest ink brings our Rihanna tattoo count to 23! We can’t imagine that Riri will stop getting new ink anytime soon as her tattoo addiction is quite apparent these days. Wonder what she will get next!?! Any guesses?

2 Responses to: Rihanna Stays Up All Night to Get New Large Cross Tattoo on the Inside of Her Wrist