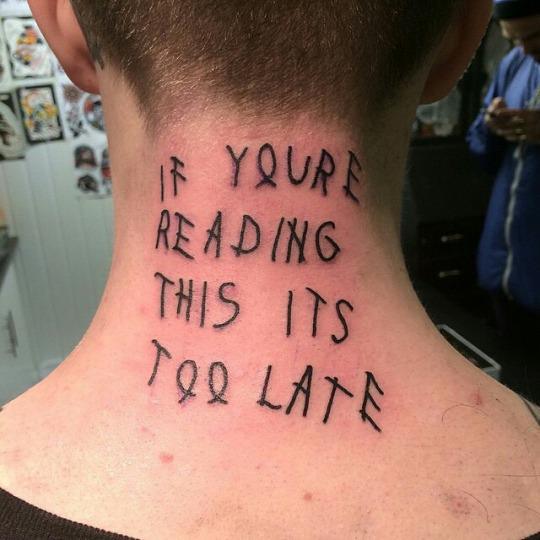 Drake pulled a Beyoncé last week when he dropped a surprise new mixtape, and at least one die-hard fan saw the unexpected release of a new Drake album as an opportunity to prove his dedication to the singer with a new tattoo. Richy Huck’s new Drake tattoo was inked by Mike Bage, a tattoo artist from Fat Panda Tattoo Studio in the U.K., and features the phrase, “If Youre Reading This Its Too Late,” taken from Drake’s mixtape album artwork and inked in the same crude black front the singer uses on his album cover. This one’s almost as good as the woman who got the giant “DRAKE” tattoo inked across her forehead. Almost.
So, we were all surprised when, just hours after releasing a 15-minute short film on February 12, Drake dropped his highly-anticipated new mixtape, If Youre Reading This Its Too Late (absent punctuation and all). The album features appearances by Lil Wayne, PARTYNEXTDOOR and Travi$ Scott, and includes the dark, moody, contemplative and emotionally vulnerable tracks we’ve come to expect from Drake, like “Preach,” “Know Yourself,” “Too Late,” and “Now & Forever.” Unfortunately, the title of Drake’s new mixtape reads a little like a suicide note, which will be emblazoned across the back of this dude’s neck forever.
Fortunately for us, the tattoo artist responsible for this new Drake tattoo offered an explanation for Huck’s decision to get the ink: “Richy is a big fan of Drake, and since the popularity of his Miley Cyrus tattoo he thought this one would be a cool idea and would get people talking.” According to Bage, “He’s got some strange tattoos already anyway,” including a risqué tat of Miley Cyrus taking a bubble bath, a tattoo of a lady riding a sausage dog, and a tattoo of a dog with boobs for eyes, so what’s another one? Drake himself has yet to comment on this latest crazy fan tattoo, but we have a feeling he’ll appreciate the free press this dude’s ink is generating for his hot new mixtape!