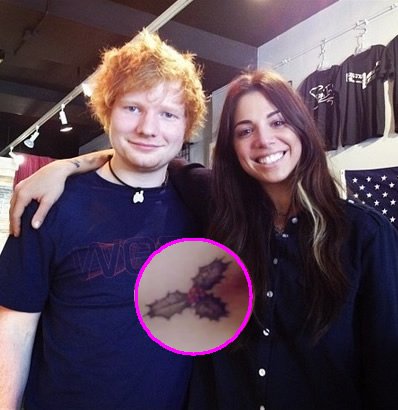 We all know that Ed Sheeran and best pal Harry Styles have matching “bro” tats dedicated to the British claymation television series “Pingu,” but did you know that Ed Sheeran also shares a matching tattoo with pop star Christina Perri? That’s right, the pretty American songstress with bad-ass biker tats and the shy, red-headed singer-songwriter from England got a matching tattoo together, and you know what it is? Christmas holly. Apparently, Christina Perri and Ed Sheeran are the best of buds and, since they share the same producers, have collaborated on a number of tracks, including Perri’s “Be My Forever” from her second studio album Head or Heart. According to Christina though, they also share the same tattoo artist, and we have a feeling these two might opt for more matching tattoos in the future!

It’s always random and kind of exciting when you find out that two pop stars who seem to have nothing in common except music (and an addiction to tattoos) turn out to be the best of friends, and that is definitely the case with Christina Perri and Ed Sheeran. As Christina recently said in an interview, “He’s one of my great friends. I met him in the bathroom at the BRIT Awards and we’ve been best buds ever since. We got really tight as soon as we met – in real life and also musically.” Christina and Ed’s friendship extends beyond the music studio though, and the two wildly popular singers have even gone under the needle to get matching tattoos recently. Christina’s tattoo was inked in November 2013 and features a small green and red bough of holly on the inside of her left elbow.

“We hang out all the time and get tattoos together,” Christina revealed about her friendship with Ed Sheeran, who is no stranger to tattoos himself. “We both got Christmas holly tattoos together. We share the same tattooist and the same producers. It’s weird, we’re very much like family, with the same circle of friends.” In addition to his matching tattoo with Christina Perri, Ed Sheeran has dozens of other tattoos, including a large red rose on his left shoulder, a huge family tree on his right shoulder, and a green lizard tattoo on his right arm as a tribute to his new album. “He also has three boxing glove tattoos for when he sold out his Madison Square Garden shows,” Christina said during the interview, “which I want too.” There you have it; another matching tat may be in store for the two pop stars…we’re just hoping it’s not the British flag Christina says she wants inked on her face!