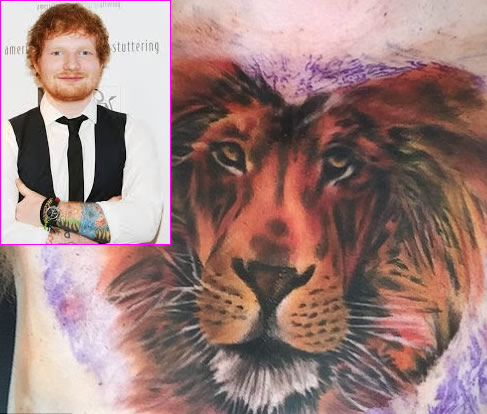 Ed Sheeran has fired back at all the haters who have been criticizing his lion chest tattoo on social media, and it appears the inked-up singer will have the last laugh, because he insists that his fresh (and fierce) tattoo won’t be his last. Ed’s lion tattoo was revealed via Instagram on August 11, and features a huge head of a lion inked in orange, black and white, right in the center of his chest. Plenty of Ed Sheeran’s fans were shocked by the massive ink, and some went so far as to say they hoped the singer’s reveal of the lion tattoo was a “prank.”

On August 12, the day after the initial reveal, Ed Sheeran took to Twitter to defend his new lion chest tattoo writing, “It’s not the first weird tattoo I’ve got and it won’t be the last, but I like all of them. I’m also eating a bowl of pasta now so byeziez x.” Ed is certainly right about his lion chest ink not being his first weird tattoo. The singer already sports a tattoo of a Heinz ketchup bottle as part of one of his sleeves, a Puss and Boots tattoo tribute to his song “Wake Me Up,” and a portrait tattoo of Pingu the penguin from a popular animated British television series.

Even though some of Ed Sheeran’s tattoos may seem pretty weird, it’s obvious that the ink holds an important meaning for the singer, as does his huge new lion tattoo on his chest. According to Ed himself, the lion tat, which was inked by celebrity tattoo artist Kevin Paul, was designed after the English football team’s lion logo and commemorates Ed Sheeran’s sold-out shows at Wembley Stadium in London, which is home base for the team. If you think Ed’s lion tattoo is weird though, consider this: he almost got a tattoo of the stadium’s floor plan instead!