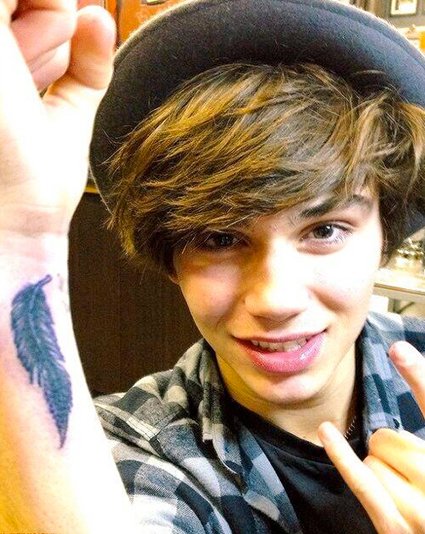 It looks like Union J singer George Shelley may have drawn inspiration from fellow boybander Liam Payne for his latest tattoo, going under the needle this week for a trendy black and white feather tattoo that is nearly identical to Liam Payne’s tattoo of a feather on his right forearm. George’s feather tattoo is inked on the outside of his right wrist, and the ink was first posted online on April 16, by British tattoo artist Kevin Paul, who is responsible for the tattoos of plenty of other inked-up boybanders, including best buddies Harry Styles and Ed Sheeran.

Not only is George Shelley’s tattoo on his wrist similar in location and design to Liam Payne’s feather tattoo, but the two tats were inked almost exactly one year apart and the pop stars have divulged almost identical reasons for getting their feather tats, too. Before posting a pic of his feather tattoo online, George Shelley tweeted this message to his followers: “When I was younger mum told me, ‘if ever you find a feather, keep it. It’s my guardian angel watching over you and bringing you good luck.’” How sweet! We also thought it was sweet when Liam revealed almost the exact same meaning behind his feather tattoo last year. During an interview with ABC’s Nightline, Liam said:

The feather was a thing, when I was a kid we used to find feathers around the house and whenever we found them my mum used to say it was my nan leaving them around for us to find, so that was quite sweet.

Shortly after tweeting that sentimental message about his mother though, George Shelley posted a pic of his new feather tat and wrote: “Wrist Tattoo – Black feather tattoo, carved on wrist, acts as a source of inspiration to the wearer motivating him to take his creativity to new heights,” so apparently George’s feather tattoo has two different meanings, or he just didn’t want to seem like he was copying Liam.

This isn’t the first time George Shelley has gone under the needle recently (he got a tattoo with his bandmates in September 2013 of the coordinates of Las Vegas, where Union J first performed as a four piece), and we doubt it will be his last, especially if he’s inspired by Liam Payne and the other tattoo-addicted One Direction boys!