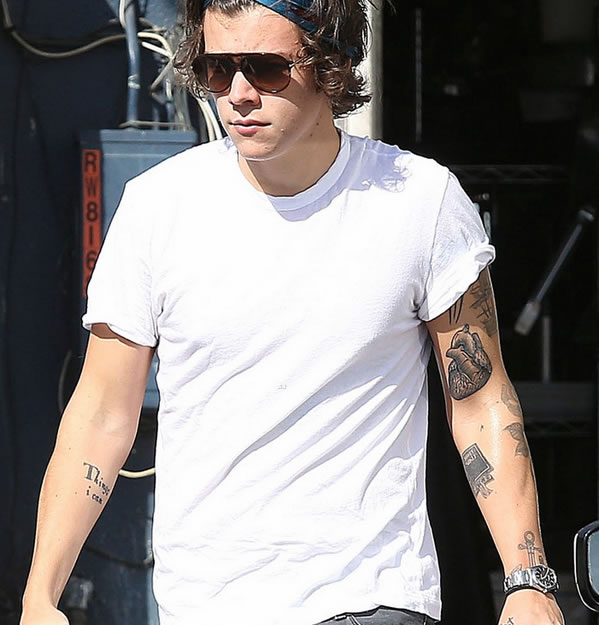 You could say that Harry Styles wears his heart on his sleeve, and as proof, the curly-haired One Direction singer has added yet another heart tattoo to his left bicep this week. Located just below the filled-in black heart tattoo and giant ship tat on his left shoulder, Harry Styles’ latest tattoo features a black and gray image of a large anatomical heart, valves and all, on his left bicep. The already heavily-inked 20-year-old showed off his new heart tattoo on February 24, 2014, while spending some down time in Los Angeles ahead of the band’s upcoming Where We Are world tour. Harry made headlines a few times last month for covering up several tattoos on his left arm, and with his new human heart tat, he looks like he could be going for a full sleeve!

So what’s the deal with Harry’s mysterious new heart tattoo? It’s not that heart tats are all that unique these days, but most guys Harry’s age opt for a classic love heart with a “Mom” banner or a girlfriend’s name, rather than an anatomical tattoo of a real human heart. While universally-accepted heart symbol tattoos tend to represent love and passion, a tattoo of a real human heart is far more deliberate and tends to have deeper, more spiritual undertones. Some people get anatomical heart tattoos to symbolize empathy and charity, for example, while others opt for a scientific image of a heart that stands for God or the physical, spiritual and emotional “center of being.” According to Egyptian practice, the heart is the last organ left in the body, and is meant to be light as a feather, not weighed down by untruths or misdeeds.

Harry Styles’ anatomical heart tattoo was inked by Liam Sparkes – the same London tattoo artist responsible for Harry’s giant butterfly chest tat and Louis Tomlinson’s tattoo reading “It Is What It Is,” also on his chest. While we are more than thrilled that Harry seems intent on trading in his infamous scribble tats for some real artwork, we have to put this out there: his heart tattoo is oddly similar to Miley Cyrus’ tattoo of an anatomical heart the pop star debuted in March 2013, inspired by Leonardo da Vinci’s famous sketch of the human heart. Coincidentally, Harry Styles’ tattoo was first spotted by die-hard 1D fans earlier this week, while the singer was attending Miley Cyrus’ Bangerz show in Los Angeles. Could Miley Cyrus’ anatomical heart tattoo be the inspiration behind Harry’s new ink? What do you all think??