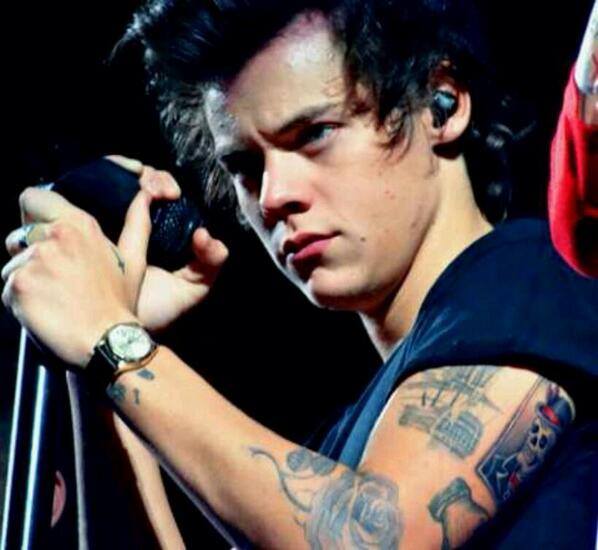 Harry Styles revealed a cool new skull tattoo on his arm on October 17, and the ink confirms our suspicions that the tattoo-addicted singer would never let Louis Tomlinson and Zayn Malik get inked in New Zealand without him. The relatively large skull tat is located on the back of Harry’s left arm, next to his gigantic ship tattoo, and features a grinning skeleton dressed in a fancy black suit with a red bow-tie and a top hat with a feather in it. Even more interesting, the skeleton in Harry’s arm tattoo is inked inside of a rectangle, which almost makes it look like a portrait or a playing card. Could Harry be taking some tattoo pointers from Zayn, who has a few skull tattoos of his own?

Louis and Zayn revealed in an interview with ONE News that they took a detour while spending time in Auckland, New Zealand on October 11, heading for a tattoo shop to add to their growing collection of ink. “We went and did a bit of shopping, and we got a couple of tattoos,” the two singers said in the interview. Our first thought was, “Wait, Harry wasn’t with them?” Well, apparently, while Louis added some small pieces to his tattoo collection, including a retro Pac-Man tat and yet another image of a spiderweb, and Zayn opted for a snake tattoo on his shoulder, Harry was busy getting a new tattoo of his own. 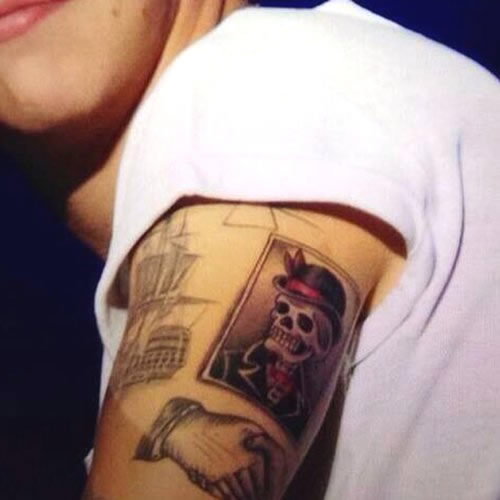 Proving that he is done with tiny random scribble tattoos (for now, at least) Harry Styles’ tattoo of the skeleton on his arm is actually very well done and makes us wonder if the pop star has ditched his former tattoo artist, Freddy Negrete, for good and has moved on to someone else – like whoever inked the detailed rose tattoo on Harry’s arm. If that’s the case, we hope Harry sticks with this guy, because we are loving his larger, more intricate tattoos!

The tattoo-loving boys of One Direction are known for getting new ink on location where the band performs, sort of like a reminder of where they’ve been, so is it possible that Harry’s skull tattoo has something to do with New Zealand? What do you think Harry Styles’ tattoo means?

One Response to: Harry Styles’ New Fancy Skull in a Top Hat Tattoo on His Arm