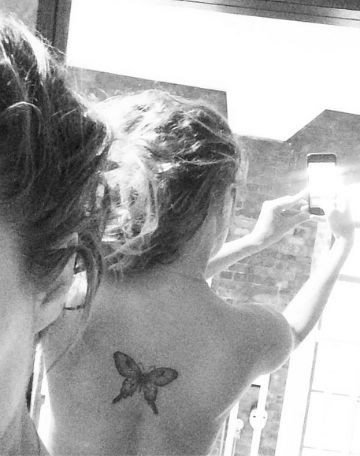 Harry Styles raised a lot of eyebrows when he debuted the huge butterfly tattoo on his chest last year, and his ex-girlfriend Caroline Flack has now raised even more by revealing new ink that may have been inspired by Harry Styles’ tattoo. Caroline uploaded a sexy selfie to Instagram on August 6, and the revealing image shows the TV star in her birthday suit, save a small black and white butterfly tattoo inked in the middle of her back. Caroline Flack’s tattoo of the butterfly was inked at the S.T. Tattoo studio, a Los Angeles-based shop started by Jason Brown, formerly of the band Evol, and Mike Muir, the singer from the band Suicidal Tendencies.

Caroline Flack, 34, and One Direction’s Harry Styles, 20, briefly dated from late 2011 to early 2012, much to the dismay of Harry’s adoring fans, who thought the Xtra Factor presenter was much too old for the 1D heartthrob, who was only 17 at the time. The controversial relationship ended in February 2012, after Caroline received numerous death threats on Twitter, but Harry must have left quite an impression on Caroline, because the two now have near-matching butterfly tattoos. Caroline’s butterfly ink is much smaller than Harry Styles’ tattoo, which takes up most of his chest but there’s no doubt the two inkings are similar in design.

It seems odd that the 34-year-old would opt for a new tattoo even remotely similar to one made famous by an ex-flame, but then again, she did date a teenage pop star 14 years her junior, so we can’t attest to her soundness of mind.

What do you all think? Is Caroline Flack’s new butterfly tattoo a design she came up with all on her own, or is it something to remember ex, Harry Styles, by?