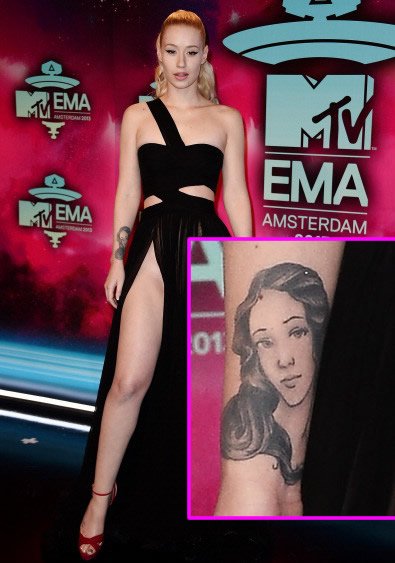 Iggy Azalea may not have much in common with Rihanna or Rita Ora in terms of their musical style, but there is one thing the three singers have in common: their goddess tattoos. Similar to Rihanna’s tattoo of the Egyptian goddess Isis inked below her breasts, and Rita Ora’s tattoo of the Greek goddess of love Aphrodite on her upper arm, Iggy Azalea sports a tattoo of the Roman goddess Venus on the inside of her right forearm. When she got tired of the small flower tattoo on her wrist, Iggy Azalea covered up the ink with a large black and white portrait of her own unique version of the Roman goddess Venus, as depicted in Sandro Botticelli’s famous 1486 painting The Birth of Venus.

During a June 2013 interview at the Power 106 LA FM studio in Los Angeles, Iggy talks about her arm tattoo, saying, “This is a tattoo of Botticelli’s Birth of Venus, Disney-fied, where Venus De Milo is born in a seashell, and it is awesome and it covers up my old ugly [flower] tattoo.” Botticelli’s painting shows the goddess Venus, having emerged from the sea as a woman, arriving at the shore on a seashell. According to ancient Roman mythology, Venus is the goddess whose functions encompassed love, sex, beauty, prosperity and fertility, and she was the mother of the Roman people through her son, Aeneas. Today, Venus is considered the Roman goddess of love and sexuality.

Iggy Made Birth of Venus Tattoo Her Own

Although Iggy Azalea’s tattoo was inspired by the famous 1486 Botticelli painting, the singer obviously took a bit of artistic license when going under the needle her Venus tattoo, which was inked by Atlanta-based tattoo artist Corey Davis in November 2012. As she herself says, Iggy’s Birth of Venus tattoo is somewhat “Disney-fied,” meaning her version is a little more cartoonish than the goddess Venus depicted in the original Botticelli painting. Leave it to Iggy to make something more than five centuries old fresh and modern though! Rita Ora made a similar move when she went under the needle in September 2013 for her “Rosetta” pinup girl ribcage tattoo based on an original piece by illustrator Alberto Vargas. 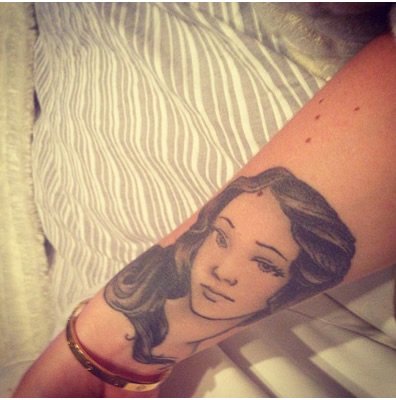 Iggy took to her Instagram page in November 2012 to show off her Venus portrait tattoo, captioning the photo: “I love my new wifey! Her and I are the only two in this relationship. Which is a nice way to say: your stranger danger anonymous ass opinion of my body is void. Thanks!” Iggy Azalea’s tattoo was inked just months after she announced her heartbreaking split from ex-boyfriend A$AP Rocky, and her explanation of the ink gives us a little insight into how she was feeling at the time. Don’t worry about her though; she’s now dating professional basketball player Nick Young, and the two appear to be head over heels!