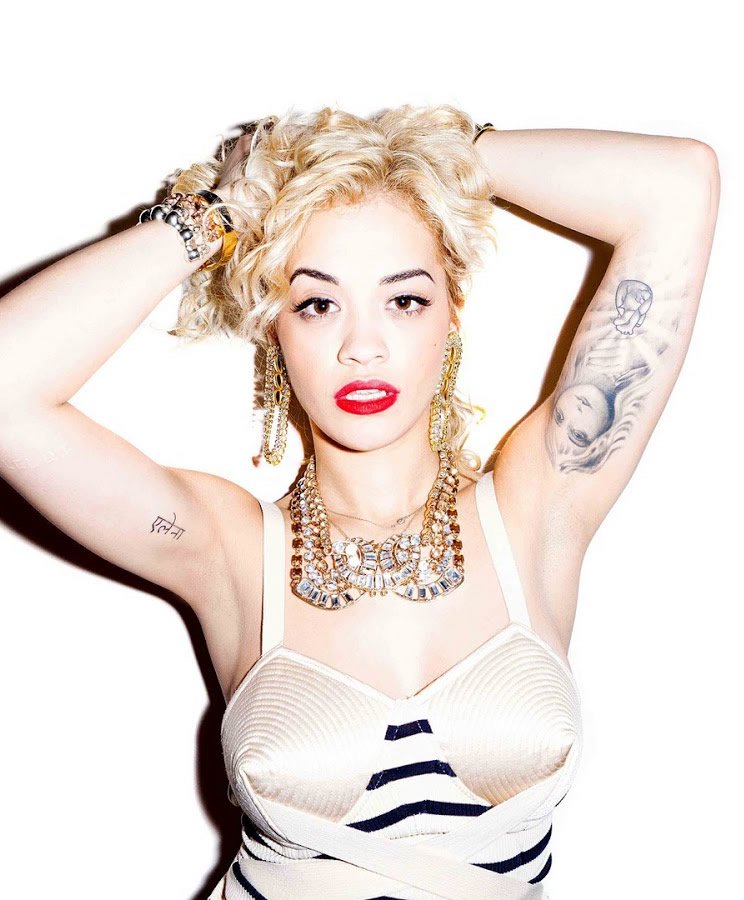 One of the largest of Rita Ora’s tattoos is the image of the Greek goddess of love, Aphrodite, which she has inked on the inside of her left bicep. The arm tat is inked in black and gray, and features the goddess of love holding Rita’s heart in her hand with rays of light radiating outward from the heart. According to the British pop star, when she first got the tat, sometime before August 2012, she only had the heart done, “but it looked weird, like a shriveled up prune, so I fixed it by having her face on.” Of all the characters in Greek mythology, Aphrodite is the one Rita most identifies with, which is what inspired the ink. “She infatuated a lot of gods with love,” said Rita about her arm tat. “She’s the Marilyn Monroe of goddesses.”

During a Tat Nation interview in August 2012, Rita Ora explained her reasoning for getting the prominent arm tattoo, which was her eighth tat overall: “This is my favorite. This is Aphrodite, the Greek goddess of love. I like Greek mythology and she was like my favorite goddess, so I just got her tattooed on me.” It’s not hard to imagine why Rita’s favorite tattoo is the one depicting the Greek goddess of love. “I like love and [Aphrodite] kinda controlled the love,” Rita has said in the past. “She knew what she was doing.”

Rita Ora’s tattoo of Aphrodite is pretty big and reaches from just below her left armpit almost all the way to the inside of her elbow. According to Rita herself, the goddess Aphrodite is the most detailed of all her tats. “I just really love it and it’s holding my heart,” Rita said about the ink. “I always believe that one person is going to control your heart when you find that love so she’s that person that’s going to control the love.” Rita also said, “I don’t care about that love now, to tell you the truth. I haven’t had the chance to think about anything yet but maybe one day, hopefully, someone will make me feel special.”

Like Rihanna, who has an Egyptian goddess Isis tattoo inked across her chest, Rita probably chose to get her Aphrodite tattoo because of what the Greek goddess represents. According to Ancient Greek mythology, Aphrodite is the daughter of Zeus and Dione and was born when Cronus cut off Uranus’ genitals and threw them into the sea. Aphrodite is widely recognized as the Greek goddess of love, pleasure, beauty and procreation, and her likeness is now immortalized forever in a pretty cool tattoo on Rita Ora’s arm.