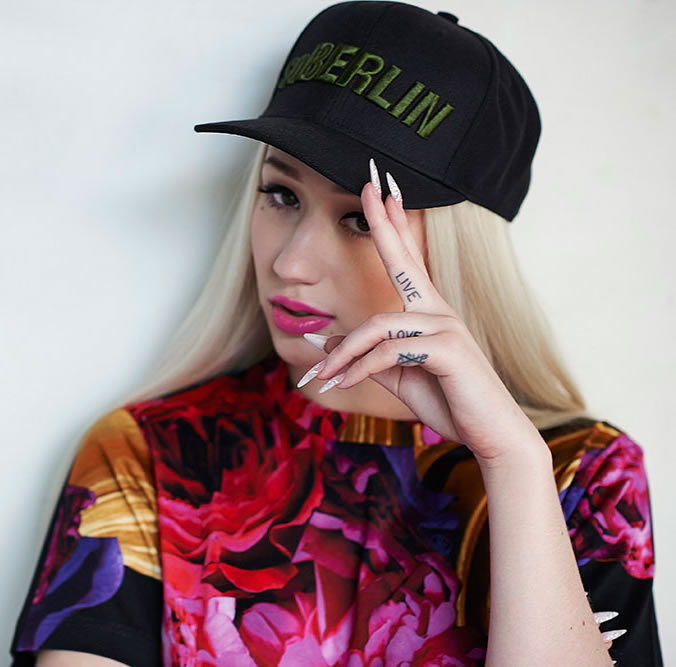 Almost immediately after getting engaged to Lakers star Nick Young, Iggy Azalea began removing her “LIVE. LOVE. A$AP.” finger tattoo tribute to her ex, Harlem rapper A$AP Rocky. And despite saying in the past that she would never consider removing the ink, the Australian rapper now admits that she regrets getting the tattoo, and that the laser removal process is far more difficult than she would have imagined. From what we hear from Megan Fox, who underwent laser treatment to remove her iconic Marilyn Monroe forearm tat, getting a tattoo lasered off is “incredibly, incredibly painful. Wherever the ink is, the laser hits it and it sort of pops up like little pieces of popcorn and explodes your skin.” Sounds fun, right??

When Iggy Azalea and A$AP Rocky first broke up a few years ago, Iggy left the “LIVE. LOVE.” portion of her finger tattoo intact, but, rather than getting his name removed from her finger, had a large “X” inked over the “A$AP” on her pinky finger. The rapper also referred to her failed relationship in “Rolex,” a bonus track off her major-label debut The New Classic, with the lyrics, “I got you tatted, you took off before the ink dried on my hands.” Following the explosive breakup, Iggy Azalea began dating Nick Young in November 2013, and the two appear to be very happy together (although we are keeping our fingers crossed that Iggy doesn’t opt for a tattoo dedicated to the basketball player).

It seems that Iggy may have been a little brash, both in getting her tattoo tribute to A$AP Rocky in the first place, and in crossing out the “A$AP” portion of the tattoo, because now the Aussie rapper is undergoing laser treatments to have the ink removed from all three fingers, and, according to her, it’s anything but pleasant. In a comment Iggy recently tweeted out to her followers regarding the tattoo removal process, the rapper wrote, “It’s all fun & games getting dumb sh*t tatted under the premise you’ll ‘just get it lasered off when I’m older’ until u actually have to do it. It’s like getting a second degree burn over and over and over again every few weeks. Reconsider kids. Reconsider! Hahaha.”