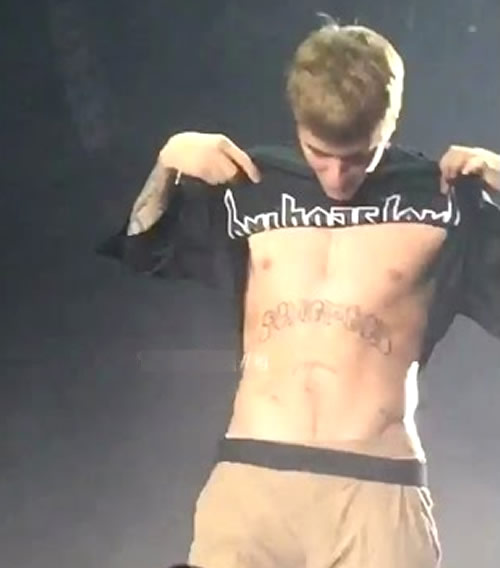 Okay, so, we all know that Justin Bieber is religious. He already has quite a few tattoos inspired by his faith, including a large cross on his upper chest, a tiny cross next to his eye, a psalm tattoo on the back of his shoulder, and a pair of praying hands on the back of his leg, and now the pop star has a brand-new tattoo on his abdomen that marks him as a “Son of God.” Justin showed off his impressive new tattoo, inked across his abdomen “Tupac-style,” at his Bologna, Italy show on November 19, lifting up his shirt and treating concert-goers to a glimpse of his six-pack abs and the fresh ink.

We can’t help but notice that Justin Bieber is getting more and more comfortable with larger, more visible tattoos, evidenced by the full-sleeve and half-sleeve he’s been working on for the past couple of years, but this new “Son of God” tattoo is a whole other story. Inked just above the “purpose” tattoo he had done last year, Justin Bieber’s tattoo is definitely one of his largest to date, and we can’t help but compare it to the late Tupac Shakur’s infamous “Thug Life” tattoo, which was located in almost the exact same spot on the rapper’s abdomen, though Justin’s ink appears to have a more positive meaning.

Justin Bieber has enjoyed plenty of success in 2016, and despite not being in Los Angeles for the American Music Awards on November 20, the pop star took home four wins for Video of the Year, Favorite Album Pop/Rock, Favorite Male Artist Pop/Rock, and Favorite Song Pop/Rock. This was also the year Justin Bieber got a tattoo on his face, which many considered a poor move that made him look more like a gangster rapper than a crooning pop star. However, as Justin’s tattoo artist said, the ink on the singer’s face was meant to represent “his faith in Jesus and his journey with finding purpose in God.”

There’s that G-word again. Justin Bieber is obviously committed to fulfilling his role as a faithful “Son of God,” and judging by this huge new tattoo, we have a feeling he’s also committed to covering his chest and abdomen with ink. Stay tuned to see what tattoo the Biebs gets next!

3 Responses to: Justin Bieber’s New Abdomen Tattoo Brands Him a “Son of God”