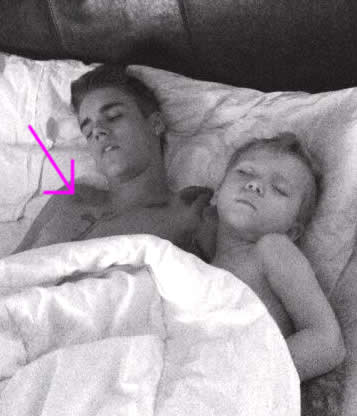 When Justin Bieber’s dad posted an intimate photo of a soundly sleeping Justin on Twitter this week, he probably didn’t realize he was showing the world the singer’s latest tattoo – a large image of a cross in the center of his chest. Justin has been super busy wracking up drunk driving, vandalism and assault charges during the past few weeks, so when the 19-year-old sought refuge in Stratford, Canada, where he grew up before becoming a pop star, his father Jeremy couldn’t help but snap an innocent photo of Justin asleep in a bed with his younger half-brother, Jaxon. Jeremy captioned the pic “Safe and sound #homesweethome,” and while the photo really is pretty adorable, we couldn’t help but ignore that part and zone in on the new tattoo Justin is sporting on his chest!

We’re pretty sure that Jeremy didn’t plan to spill the beans about Justin Bieber’s tattoo when he posted the sweet picture of the two boys catching some Zs on January 30, 2014. In fact, he was probably just trying to show the world how Justin is just an innocent teenager, even as the authorities in the U.S. and Canada investigate the recent criminal charges filed against the singer, which include drunk driving, assault, vandalism and drag racing. In fact, on the same day that the lab test results and details of Justin’s sobriety tests from the drag racing incident were released, the 19-year-old was booked on an assault charge in Toronto, where he was accused of hitting his limo driver over the head multiple times last month. Still, Justin’s cross tattoo was reportedly inspired by his belief “in God and in Jesus Christ,” and was inked by Keith “Bang Bang” McCurdy during a flight (yes a FLIGHT) from Panama to Canada, aboard the singer’s private plane. 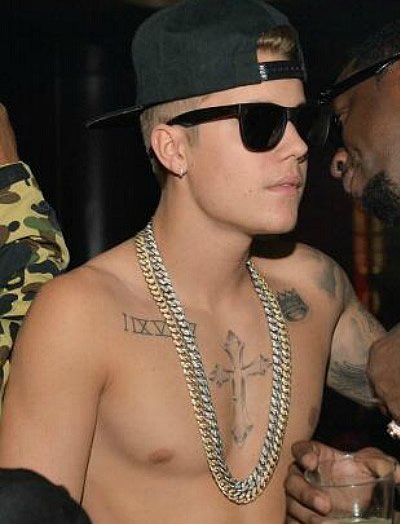 Despite his recent bad behavior, Justin Bieber is a self-proclaimed devout Christian, and he has no problem showing the world how much his faith means to him – mostly in the form of tattoos. The second tattoo Justin ever got was during his 2011 My World tour in Israel, where he and his dear old dad hit up a tattoo shop and got matching tattoos inked on their sides that read “Yeshua,” or Jesus in Hebrew. Since then, the singer has added countless other religious tattoos to his collection, including a portrait of Jesus on his leg, a Greek “X” tattoo on his arm, a Bible psalm tattoo on the back of his shoulder, and now the large black and white tat of a cross outline on his chest. Now that we think of it, it’s kind of surprising that Justin has waited this long to get a plain tattoo of a cross – the most simple and universal symbol of faith. 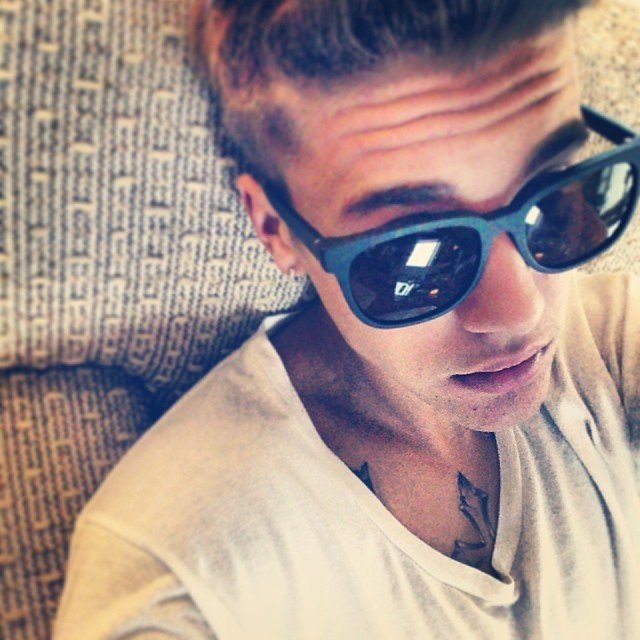