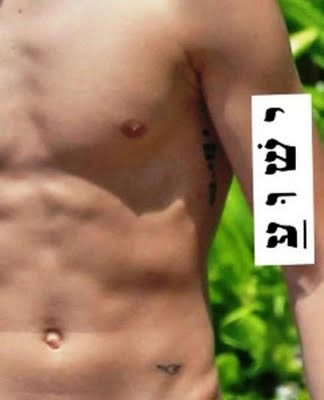 It’s hard to picture Justin Bieber with a tattoo, although the star actually has three to date. Continuing to share his dad’s affinity for body art, Bieber recently got a tattoo on his left ribcage. Beiber’s new tattoo is written vertically just below the star’s left armpit and reads “Yeshua,” which means “Jesus” in Hebrew. Justin Bieber and his dad got the matching Hebrew tattoos during Bieber’s “My World” tour in Israel this past April. Although Bieber’s tattoo matches his dad’s, the inspiration may have actually come from his mother, who was primarily responsible for raising Bieber after his parents’ divorce. Bieber’s mom is said to be very religious and is clearly a very important person in the star’s life. Bieber is a devout Christian, but his manager Scooter Braun is Jewish. According to a friend, Bieber says prayers in English and Hebrew before going on stage to perform; the “Shema Yisrael” brings him luck.

Although the star’s trip to Israel was clearly the motive behind Justin Bieber’s new tattoo, it seems his visit to the Holy Land wasn’t as enjoyable as he had hoped. Bieber claims his experience in Israel was ruined by persistent paparazzi who followed the pop star everywhere he went. They were probably desperately trying to catch a glimpse of Bieber’s new tattoo!

The secretive Bieber didn’t say a word about his new tattoo though, which remained a mystery until the paparazzi finally caught up with the star in Hawaii. 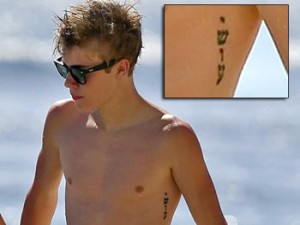 Some of the first pictures of Bieber’s tattoo were taken while on vacation in Maui with girlfriend Selena Gomez, shortly after the tattoo was inked. Justin Biebers bird tattoo on his hip was one thing, but a very visible tattoo on his ribcage?  The new Bieber tat has left fans wondering if the teen star is rebelling against his innocent image. Since Bieber’s dad is clearly a fan of tattoos, Bieber may be headed down the same rock-and-roll road.

Although tattoos have become more and more respectable in recent years, body art still holds a certain stigma, especially for religious individuals. According to Leviticus 19:28, “Ye shall not make any cuttings in your flesh for the dead, nor print any marks upon you.” Many rabbis are also opposed to tattoos, mainly because of the forced tattooing imposed on Jews by the Nazis. In Islam, tattooing is considered “haram,” legally forbidden under Islamic law. By these standards, some have gone so far as to call Bieber’s ribcage tattoo blasphemy. That seems a little harsh though, Bieber was probably just trying to represent his religious beliefs by getting the Jesus tattoo.

The Hebrew Tattoo and Justin’s Dad 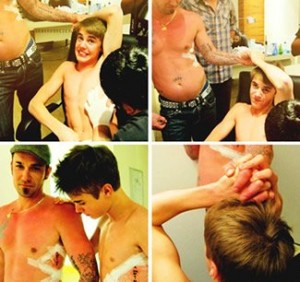 Justin Bieber’s new tattoo must have been pretty painful, since it is located on the star’s ribcage and is significantly larger than the bird tattoo on his hip. Pictures of Justin Bieber tattoos actually show the star getting the Hebrew tattoo, with his dad by his side holding his hand. From the look on the 17-year-old’s face, we’re hoping Bieber’s tattoo means a lot to him. Since Bieber’s dad Jeremy actually got a matching Hebrew tat at the same time, we’re assuming he approves of the teen’s decision to get another tattoo.

29 Responses to: Justin Bieber’s Hebrew Tattoo on His Left Ribcage