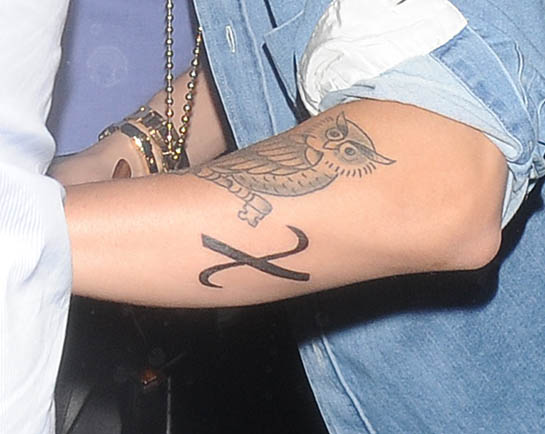 Justin Bieber debuted a new tattoo on February 25, as the pop star and his entourage were leaving the Cirque du Soir nightclub in London, and the symbolic inking has many Beliebers scratching their heads. The Biebs is currently in the middle of his UK tour, and, possibly tired of being photographed by paparazzi non-stop, the pop star attempted to hide from the cameras by crouching inside the circle of his entourage as they left the club. That didn’t stop the paps from getting a shot of the Biebs’ new ink though, which is located on Justin’s left forearm, directly next to his large owl tattoo. Some other celebrity media outlets are calling the latest Justin Bieber tattoo “cryptic” and “mysterious;” lucky for you, we know the meaning behind the singer’s arm tattoo. Read on to find out!

We all know that Justin Bieber loves him some religious tattoos, and the new ink on his arm is no exception. Located next to and slightly below the owl tat on his arm, JB’s new tattoo features the letter “X,” with one straight diagonal line and one curved. The arm tattoo certainly has confused some other celebrity media sources – like the Daily Mail, which called the tat a cross, and The Sun, which called Justin’s tattoo a multiplication sign – but we’ve got the real inside scoop. In reality, Justin Bieber’s “X” tattoo is the Greek symbol for “Christ” (think Christmas = Xmas). The “X” is actually a representation of the Greek letter “Chi,” which is short for the Greek word meaning “Christ.” According to one source, the Greek letters “X” (Chi) and “p” (Rho) superimposed together was once a very common symbol of Christ and was called the Chi-Rho.

The Biebs Has Faith 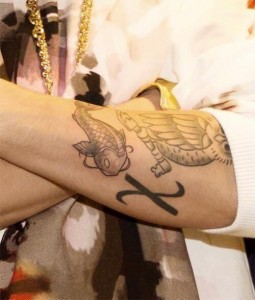 Justin Bieber’s Greek tattoo marks his 12th inking to date, and is the third tattoo the singer has gotten so far in 2013, after the Indian head hockey logo on his shoulder and the Roman numeral tat on his chest. Since the pop star is in the midst of the European leg of his Believe tour, there’s a good chance he got the arm tattoo inked in London. In fact, it is believed that Justin went under the needle some time after his date with potential new flame Ella-Paige Roberts-Clark, as he enjoyed a night off from his Believe tour to watch another famous Justin (Timberlake) in concert. In addition to the Greek tattoo, many of JB’s other tats follow the religious theme – including the praying hands and Jesus portrait on his legs, and the Hebrew “Jesus” tattoo on his ribcage. With the Greek “Christ” tat on his arm, Justin Bieber proves yet again that faith plays an important role in his young life.