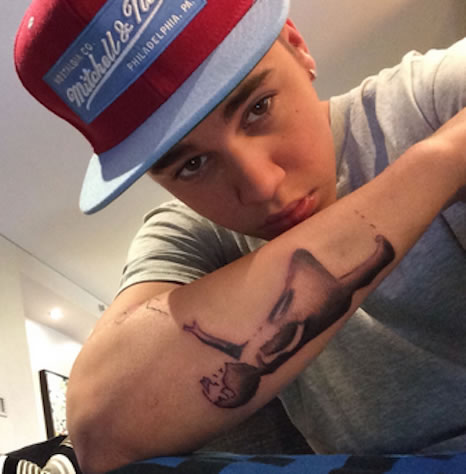 Justin Bieber has officially upped the ante with his latest tattoo, switching gears from random animals, music symbols and Bible quotes to a replica of the iconic “Balloon Girl” piece originally painted by famed British street artist Banksy. Justin Bieber revealed his new arm tattoo on Twitter on March 13, 2014, and then deleted the post just seconds later. Believe it or not, that was enough time for fans to catch a glimpse of Justin Bieber’s tattoo pic, which he captioned “Don’t let your dreams float away.” Tattoo number 31 for the Biebs features a black and gray image of a little girl with her arm outstretched, reaching for a heart-shaped balloon. The new tat is inked on the outside of Justin’s right forearm, and it looks to us like the singer may have his eye on another full-sleeve tattoo!

We all know that Justin Bieber is a big fan of graffiti art (he has tagged buildings throughout the world, from Australia to Canada and Colombia), and in October 2013, he posted some shots of his work online, along with the caption: “I found a new hobby.” The singer even commissioned street artist Alec Monopoly to paint a mural last December as part of the red carpet premier for his Justin Bieber’s Believe documentary. This time though, the Biebs has taken his love for street art one step further by going under the needle for a Banksy-inspired tattoo of the artist’s iconic “Balloon Girl” sketch. And, although Banksy recently reworked the well-known image to feature a Syrian girl as a tribute to the three-year anniversary of the conflict in Syria, Justin opted for the original artwork in his arm tattoo. 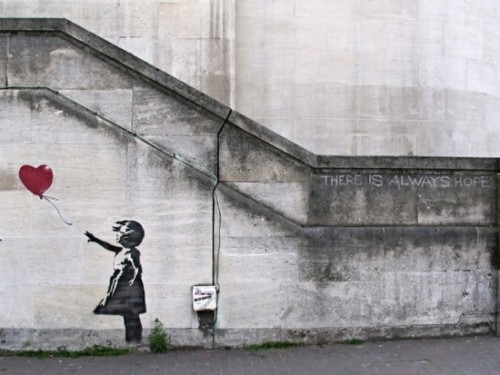 Considering the fact that Justin is usually pretty stoked to show off his artwork online, we’re not sure why he decided to delete the arm tattoo pic so quickly, although perhaps the photos of Justin Bieber’s tattoos the Miami police department recently released online took some of the air out of his celebration ritual. Whatever his reasoning, he’s obviously pretty proud of his new stencil-style tattoo, which could have been inspired by his recent reunion with on-again, off-again girlfriend Selena Gomez…who he doesn’t plan on letting “float away” again any time soon. Judging by Justin Bieber’s new hobby and his Banksy tribute tattoo, it’s obvious that the singer is psyched about getting into street art, but after seeing some of his graffiti “artwork,” we’re hoping he sticks to his day job. 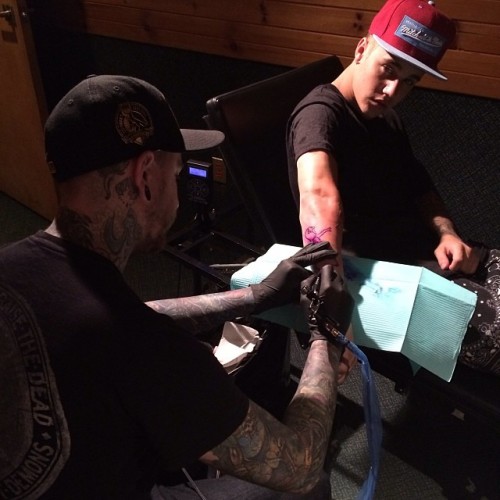