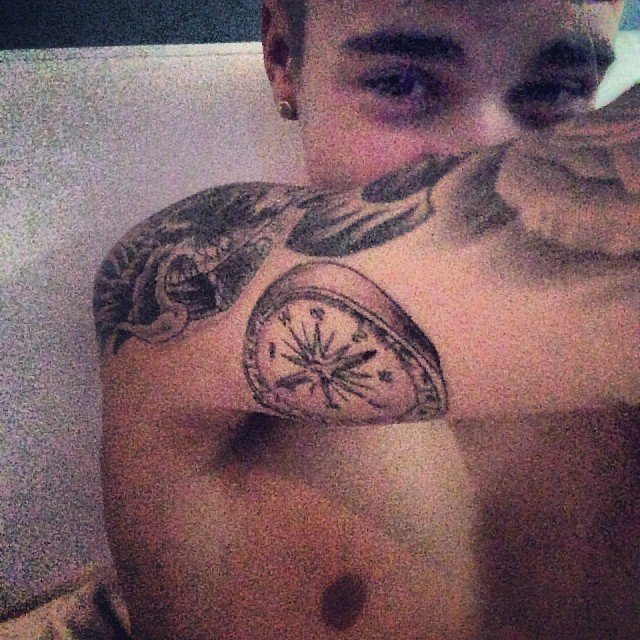 Less than 24 hours after showing off the ironic jester tat on his right arm, pop star Justin Bieber added a another new tattoo of a compass to the outside of his left bicep, which has us thinking the troubled 19-year-old may finally be seeking some direction in his life. Justin debuted his 26th tattoo on Instagram on January 12, 2014, along with the caption “New tat,” and the ink features a large black and white compass with the directional dial pointing just east of due south. Justin Bieber’s tattoo was inked as part of the singer’s nearly complete left sleeve, next to his fierce tiger and eagle tattoos, and has sparked rumors that the singer may be starting another full-sleeve tat on his left arm. Perhaps he’s getting his tattoo inspiration from One Direction’s Louis Tomlinson, who sports a very similar tattoo of a large compass on his right forearm.

Justin’s small jester tattoo on his right arm was revealed in the midst of felony charges pending against the pop star for allegedly egging his neighbor’s house, and the ink was perceived by the public as a taunt aimed at the authorities who can never seem to get charges to stick against Justin. His compass tattoo however, may have a more serious meaning, and could even be a cry for help from the young singer, who has been in the public eye since he became a YouTube sensation at the age of 2008. It seems that Justin may finally be looking for some direction, and while the Biebs has looked to his religion for guidance in the past, the compass is a more literal representation of that desire. 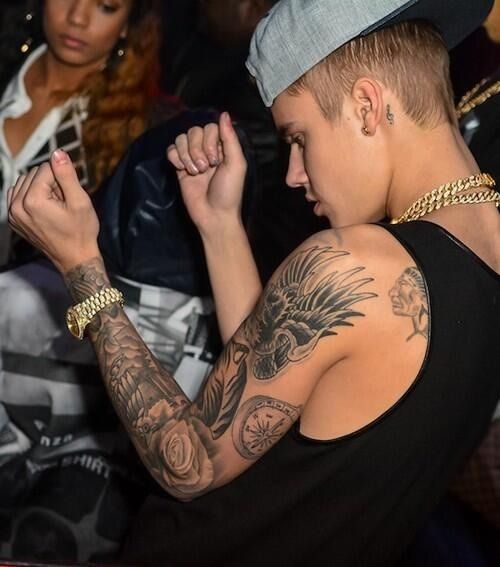 Back in September 2013, Justin Bieber debuted a tattoo on the back of his right shoulder that was inspired by Psalm 119:105 from the Bible. Justin’s religious shoulder tattoo reads “Your word is a lamp for my feet, a light on my path,” which may as well be a plea to God to “show me the way!” It’s pretty clear that the 19-year-old is feeling a little lost these days – and has apparently felt that way since he broke up from longtime girlfriend Selena Gomez last year – but rumors are swirling now that the two may be getting back together. We’re hoping Justin’s compass tattoo may serve as a directional beacon for the pop star, because he clearly needs to get his sh*t together, especially if he expects to get Selena back!