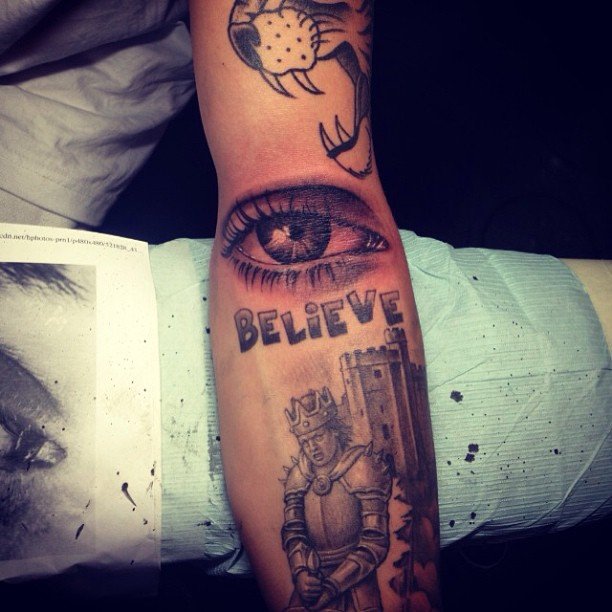 Justin Bieber debuted another new tattoo on July 17, and a full sleeve is now in sight for the 19-year-old singer, whose most recent ink features a very realistic-looking eye tattoo on the inside of his left arm. Justin Bieber’s eye tattoo is inked in black and white and is located just above the “Believe” tattoo the Biebs revealed in June 2012, and the roaring tiger tattoo that showed up on the singer’s arm in April 2013. Bieber’s new arm tattoo was inked by the infamous tattoo artist Keith “Bang Bang” McCurdy, and a close up of the creepy-looking eye tat was posted on the singer’s Instagram page along with the caption: “@bangbangnyc did this art ., Moms always watching ;-).” Bieber also posted a pic of himself posing with Bang Bang, in which the pop star looks less than thrilled about the new ink.

Bieber’s Mom Will Always be Keeping an Eye on Him

As far as the meaning behind Justin Bieber’s tattoo, the pop star pretty much said it all when he posted the message, “Mom’s always watching.” His new tat is an exact replica of his mother’s eyeball, and it will always be keeping n eye out for him, although the eye ink may symbolize more than just Pattie Mallette keeping an eye out. The eye in Justin Bieber’s arm tattoo is similar to the “all-seeing eye of God,” or the “Eye of Providence,” which is usually depicted with an eye surrounded by a triangle and rays of light – like the image on the American dollar. According to Christian belief, the Eye of Providence is sometimes interpreted as representing the eye of God watching over humankind, and the symbol is also commonly associated with the Freemasons, who believed that a Mason’s thoughts and deeds are always observed by God – the Great Architect of the Universe. 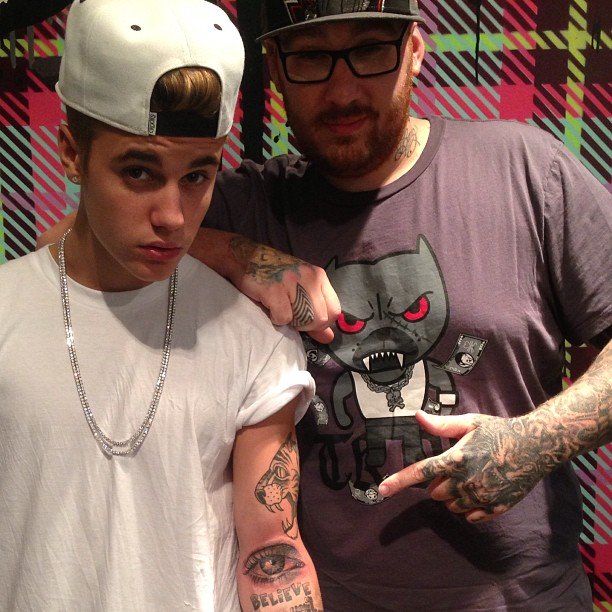 Judging by Justin Bieber’s obvious fondness for religious-themed tattoos, it’s possible that the large eye tat on the singer’s arm was also inspired by the pop star’s religious beliefs, mainly symbolizing the divine presence of God. If you need us to spell it out for you (literally), the picture/word combination of the two tattoos on Justin Bieber’s left arm now says, “I believe,” which is pretty darn funny, especially if it wasn’t intentional. Justin Bieber is on a role with all the new tattoos he has gotten inked in 2013 alone, including the mysterious cross tattoo with a bleeding globe – which we broke the news on exactly a week ago, but which the Biebs hasn’t said a word about in public yet. With this new eye tattoo, which looks like it might “blink” when Bieber bends his arm, we’re left wondering if the 19-year-old is planning to cover his entire left arm in a full sleeve…