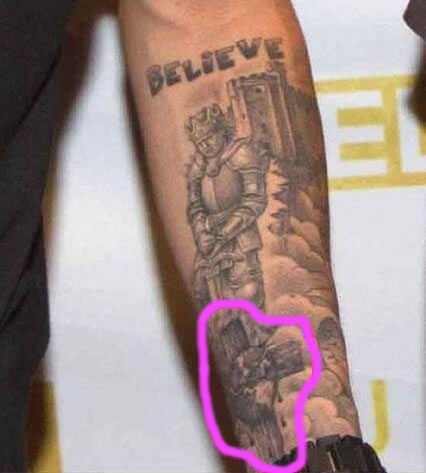 Justin Bieber may have taken a break from religious tattoos for a while, but the pop star is back on track, having recently added a new cross tattoo with and bleeding globe to the collection of ink he already sports on his left arm. Directly below the detailed knight tattoo the Biebs revealed on May 30, 2013, the singer has added another new tattoo to his half sleeve, and the meaning of the tattoo appears to be pretty heavy. Justin Bieber’s new arm tattoo features an image of a bleeding globe with a thorny crown, affixed to a large wooden cross like Jesus. There’s no doubt that Bieber takes his religious beliefs seriously, and this new addition to his collection of religious tattoos is further proof of that! What do you think this one means…? We have some ideas.

Justin’s Many Tattoos Inspired by Religion

While we were all busy interpreting the castle and waves tattoo Justin Bieber got inked on his left arm in June 2013, the singer secretly added another arm tattoo to his rapidly growing sleeve – this time reverting back to the religious theme he seems to prefer when it comes to tats. In addition to the new cross and bleeding globe Justin has inked on his arm, the singer also sports a “Yeshua” Hebrew tattoo on his ribcage that reads means “Jesus,” a semi-creepy portrait of Jesus on his left leg, a pair of praying hands on that same leg, and a Greek symbol meaning “Christ” on his left arm. More recently, Justin Bieber’s tattoos have consisted of non-religious images, like a koi fish, a tiger, a knight and a castle with waves – all inked as part of the pop star’s sleeve tattoo. 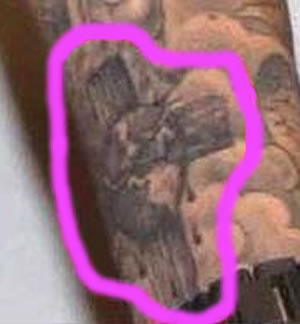 While most of Justin’s other religious-themed tattoos have had pretty broad meanings, this tattoo of a bleeding globe on the cross seems to mean something far more specific. Perhaps Justin Bieber’s tattoo is meant to represent the Earth being sacrificed because of man’s transgressions, much like how Jesus died on the cross for our sins. Serious concerns have been raised about the adverse effect mankind appears to be having on the Earth – including such acts as pollution, deforestation, overfishing and more – and how quickly these things are destroying the natural environment. Based on this, the meaning of Justin’s arm tattoo could be that mankind is responsible for the destruction and death of the Earth.

Not Quite Finished w/ His Half Sleeve?

No one is quite sure when Justin Bieber got the new cross tattoo inked on his arm, although it’s possible the religious image was added shortly after as his castle and waves sleeve tat as part of the inevitable full sleeve tattoo. Hey, wait a minute…the Biebs did recently joke about getting a foot tattoo inspired by Harry Styles’ ankle tats. Maybe Justin and Harry hit up the tattoo parlor together last week and got matching cross tattoos! Despite the fact that Justin Bieber doesn’t always post pictures of his new tattoos online for his fans to admire, the paparazzi usually does a pretty good job of capturing the pop star’s new tats on camera shortly after they are inked. This time, however, the cross and bleeding globe image on Justin’s arm somehow slipped by the paps. Lucky for you all, we have eagle eyes when it comes to Justin Bieber’s tattoos, so we’ll always keep you up to date on his new ink!