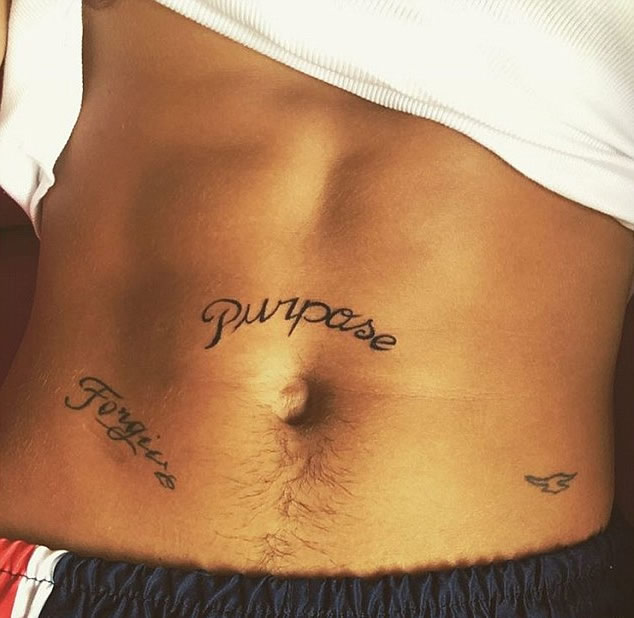 When Justin Bieber says he’s planning to get a new tattoo, he rarely disappoints, and in an Instagram pic posted by the Biebs on Tuesday, the 21-year-old shows off his rock-hard abs, along with a brand-new “Purpose” tattoo on his stomach! Justin Bieber’s tattoo is located in the center of his abdomen, just above his belly button, and features the word “Purpose” inked in an elegant black script font. The pop star posted the photo of his new tattoo on Instagram on October 6, and captioned the snap simply “#purpose.”

Many of you have probably already guessed that Justin Bieber’s tattoo on his stomach is a tribute to his upcoming album, titled Purpose, which is aptly named if it represents the way the troubled star plans to approach the rest of his life, putting his rebellious teen years behind him. The Biebs’ highly-anticipated new album, which includes the hit single “What Do You Mean,” drops on November 13, and the pop star has been posting friendly reminders for days about his new effort, along with the captions “#6weeks” and “#nov13”…and now he has a permanent reminder on his stomach!

There has been a lot of hype recently about Justin Bieber’s new album, his first studio album since 2012’s Believe, and for good reason, if you ask us. The Biebs has been through a lot since 2012 – including graffiti and egging accusations, drunk driving in Miami, charges of attempted robbery, and the VMA tears heard ‘round the world – and if we had taken a guess last week what the design for Justin’s 51st tattoo would be, we would have put our money on a tribute to his upcoming project.

Justin Bieber first hinted at a new tattoo during an interview last week with TV3 in New Zealand, saying that if someone hooked him up with a tattoo artist that night he would get some ink, even though he was leaving the country that very same evening. At the time, Justin said that his new tattoo would probably be located on his right bicep or chest, but it looks like he went for the stomach instead, which gave him an excuse to show off his impressive six pack. Justin’s “Purpose” tattoo also goes nicely with his “Forgive” hip tat and “Patience” neck tattoo, don’t you think?