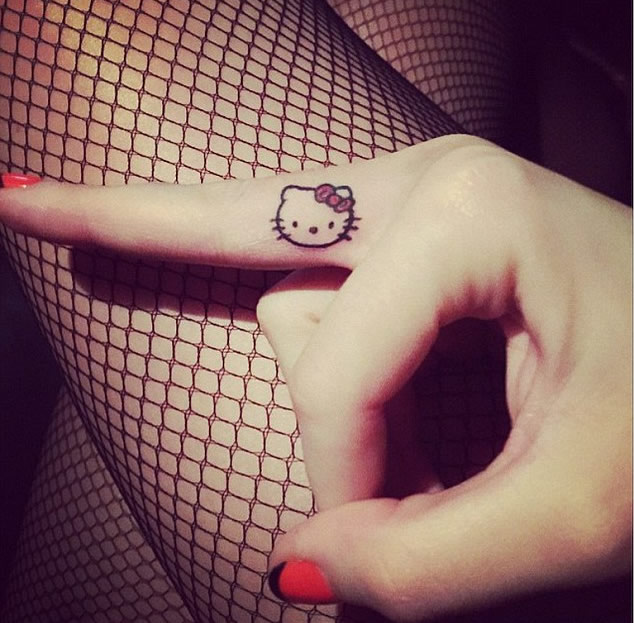 It was only a matter of time before Katy Perry added a Hello Kitty tattoo to her collection, right? After all, she showed up at the 2009 BRIT Awards in London decked out in head-to-toe Hello Kitty gear, appeared as a dorky Hello Kitty enthusiast on SNL in 2011, sported a full pink cat suit during her Prismatic tour this year, and feigned horror along with everyone else on social media recently, when Hello Kitty owners Sanrio revealed that the iconic figure is, in fact, not a cat at all, but a cartoon girl. And now the pop star has an adorable tribute to Hello Kitty inked on her finger, which she likely got to celebrate her own 30th birthday (on October 25), as well as the 40th anniversary of the Hello Kitty franchise, which was first developed in 1974.

After finding out back in August that Hello Kitty isn’t actually a cat, Katy Perry calmed the fears of her Twitter followers by tweeting “It’s okay Hello Kitty fans, Kitty Purry is a cat,” referring to her pet cat and also her own alter-ego, which comes out during each leg of her Prismatic world tour. There’s no doubt that Katy Perry is obsessed with Hello Kitty, and cat or not, the iconic figure obviously has an important meaning for the notoriously kooky pop star. Katy Perry took to Instagram on October 30 to reveal her cute new Hello Kitty tattoo, which is inked on the inside of her right-hand middle finger and looks exactly like the cartoon character, pink bow and all. Katy captioned the Instagram photo of her Hello Kitty tattoo, “Does this make my gang signs look soft now?” and also wrote on Twitter that same day, “OMG Hello Kitty is a scorpio too ILY!!”

Although Katy Perry’s tattoo perfectly coincides with Hello Kitty’s 40th anniversary and the opening of the first Hello Kitty Con in Los Angeles, the singer’s new finger tat could also be a tribute to her Prism album and Prismatic world tour, which features a lot of cat-related stuff, including one theme/costume she refers to as “Cat-oure.” After all, Katy Perry has a habit of adding a tiny new tattoo to her collection for each new album and tour she completes, including her peppermint tattoo tribute to her Teenage Dream album and California Dream tour, and her strawberry tattoo tribute to her One of the Boys album and Hello Katy tour.

Katy Perry celebrated her 30th birthday by inviting 70 of her closest friends and family members to party the night away at the luxe Amanjena hotel in Morocco, where the entertainment included everything from shisha pipes to fire breathers and performances by pop star friends like Ellie Goulding. Apparently, Katy’s 30th birthday was originally supposed to take place in Egypt, which makes sense considering Egypt was a major theme in her Prism album and Prismatic tour, but the location was moved to Morocco at the last minute due to a security threat. Katy obviously wasn’t put off by the change of venue, and ended up getting a new Hello Kitty tattoo to celebrate!